On the Home Front: The Butte Montana Copper Mines 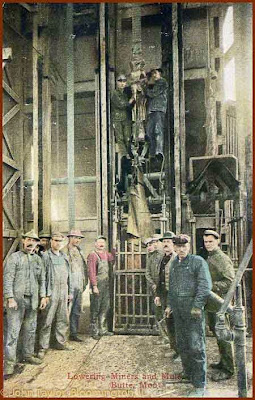 Miners Going Under at Butte

When war came in 1914 one of the most strategic materials was copper. The world was already in a copper boom due to the need for electrical wire. The supply was tight and new production slow to come on line due to the high capital costs of new mines. In 1914 the U.S. mines contributed 77 percent of the world’s copper, and 31percent of U.S. production was from Butte, Montana, which sat atop an ore body that was 50 to 80 percent copper, the richest in the world, and also containing important amounts of zinc, lead, manganese, and molybdenum.

Needless to say, the price of copper skyrocketed, going from 15.22 cents per pound in 1913 to a high of 27.2 cents per pound in 1916. After the U.S. entered the war the price was fixed at 23.5 cents per pound. With production costs under 10 cents per pound the profits could truly be called extraordinary. The Butte mines were already running at capacity, but the operators ramped up output by going deeper and putting on bigger work crews. Some shafts were lowered a thousand feet, about 20 percent more miners were sent down, and of course the shafts ran 24 hours a day. Maintenance and expansion had to be done while running at high output.

This led to accidents. During the war at least 437 miners died underground in Butte. On 8 June 1917 a fire caused by maintenance work in the Speculator Shaft killed at least 164 miners (some records say 169) in that shaft and the adjacent Granite Mountain Shaft, as they were connected at several levels. This accident was the worst ever in a non-coal mine in the U.S. and the fourth-worst in any kind of mine. Although there had been other accidents in Butte (for example, on 9 October 1915 sixteen miners had died in the same Granite Mountain Shaft), the huge death toll stunned the community and even the nation.

Both shafts were badly damaged and several others had to be shut down due to carbon monoxide build-up. The mine owners encouraged speculation that the fire was sabotage to limit production. The person suspected of starting the fire was a German immigrant named Ernst Sullau, but no evidence of a German plot was ever found. Organized labor never bought into this theory at all, feeling that the cause was disregard for safety and a strike was called that further crippled production until the end of the year. 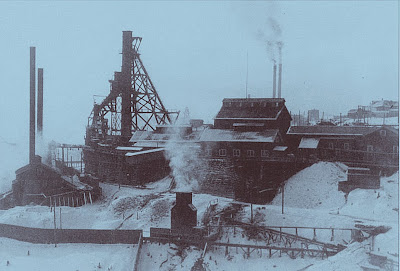 The Speculator Shaft After the Disaster

Due to minor disturbances, including anti-war protests by Irish and Hungarian miners, the state militia had already been called out in April to guard property and maintain order. Among them was my great-great uncle, Sgt. T. J. Coberly, a 45-year-old who had served in the Philippines during 1898–99.

But it was decided that spies and strikes were way beyond the capabilities of men like Tom Coberly and regular soldiers were needed. Units of the 14th Infantry Regiment, fresh from service on the Mexican border, were rushed to Montana. In addition to responsibility for guarding mine properties, the regular army units were tasked with "enforcing patriotism."

As the strike continued, a leader of the Industrial Workers of the World named Frank Little came to town.  After a bombastic speech Little was murdered by persons unknown. Soldiers were among the suspects, but no one was ever charged with the crime.

The federal occupation of Butte lasted until 1921. A Justice Department report later stated that "troops in Butte changed from a fair, restrained body of men to an unrestrained, vicious and violent body of men carrying on a veritable reign of terror."  Other consequences of these events were also far-reaching. Sedition Acts were passed to prevent speeches like those delivered by Little and many labor leaders and socialists were arrested, including Eugene V. Debs.

Production of copper in Butte never again reached the 1916 levels. A serious national shortage was averted by the rapid expansion of the Bingham Canyon pit in Utah, the beginning of the large-scale strip mining that many consider to be the greatest environmental disaster of the twentieth century.

Did I mention that from January until September 1918 the troops in Butte were commanded by Capt. Omar N. Bradley?