American Troops Are Welcomed “Over There” by King George 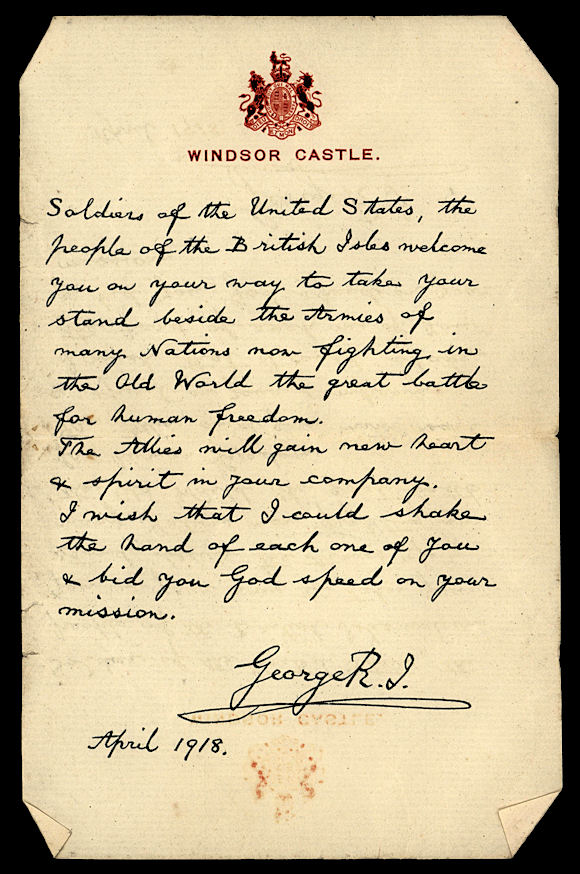 The Doughboys had just disembarked from their troop ships 100 years ago when they were handed a letter from King George V welcoming them to the British Isles and to the Great War that had engulfed Europe.

Lieutenant Francis Wolle, who was assigned to the 356th Infantry, was handed the king’s printed letter as he and other soldiers boarded a transport train before being deployed to France. Wolle used the back of the king’s letter to write a short letter to his parents in New York City: “On the train thru England in a 1st class compartment with 5 other officers. This letter was given me as I boarded the train.”

In the handwritten message printed on Windsor Castle stationery and dated 18 April, King George welcomed the U.S. soldiers to the British Isles “on your way to take your stand beside the Armies of many Nations now fighting in the Old World the great battle for human freedom.”

“The Allies will gain new heart and spirit in your company,” he continued. “I wish that I could shake the hand of each one of you & bid you God speed on your mission.”

Wolle, who would survive the war and become an English professor at the University of Colorado, was impressed by the English towns and countryside that he saw from the train, but he was scrupulous in not naming specific locations. His letter was postmarked 19 June 1918, in Southampton, which apparently was where these American troops arrived. “Passed thru a number of places noted in history & literature where I looked hard,” Wolle wrote his parents. “Can’t name them tho. At camp I spent most of my time censoring letters of men in the company. It is a tedious job & one gets so he reads knowing nothing in the letter except whether it is allowed or not. Many things are not.”

King George’s expressed wish to shake hands with American soldiers did come to pass. In addition to reviewing American troops outside Buckingham Palace, the king, Queen Mary, and Princess Mary visited a Red Cross hospital for 1,000 wounded American servicemen at Dartford, Kent, England near the end of the war.

An article sent to American newspapers “by cable “reported that King George “talked with scores of men from all parts of the United States, not confining himself to a mere greeting, but pausing in a great many instances to hold lengthy conversations with them. He congratulated them on ‘the wonderful work Americans are doing over here,’” according to the news report

The Doughboys were enthusiastic about the royal visit, as well.

“Their hearty greeting affected the visitors deeply, and King George smiled and waived his acknowledgement in the most enthusiastic fashion. The demonstration was renewed when the party entered the hospital, each ward trying to outdo the other in the vociferousness of the welcome.”