Notes from the Trenches: A Musician's Journey Through World War I
Reviewed by Peter L. Belmonte

Notes from the Trenches:
A Musician's Journey Through World War I 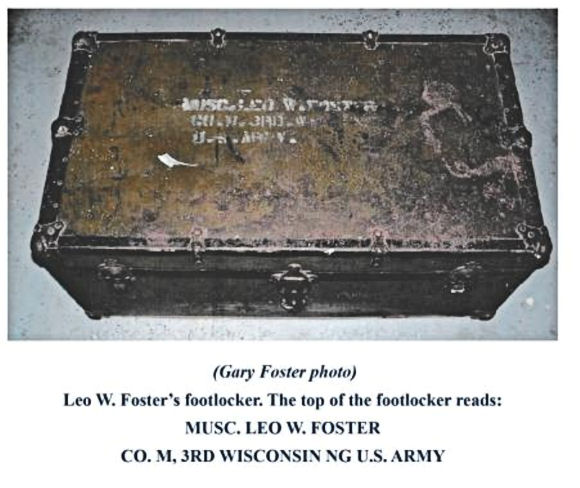 Gary Foster, a retired U.S. Navy aviator, inherited the footlocker shown above, full of his grandfather's World War I letters and memorabilia. His grandfather, Leo Foster, had been a bugler in the 32nd Division, and Gary thought the letters worthy of preserving and publishing. Accordingly, Gary used a self-publishing company to create this volume.

Leo's letters during his first year of service reflect very little, if any, dissatisfaction with his situation. On the contrary, in many letters he tells of his happiness, especially in Waco, and the fun he's having with soldier and civilian friends. Like most soldiers, Leo was quite concerned with his food situation, and he took every opportunity to eat well; throughout his service he mentions the food he's eaten and the weight he's gained. Leo's quaint Midwestern speech pattern comes through in most letters. For example, in one letter we find: "Oh, sweet dill pickles in vinegar, talk about a gay life," and "Gee I will bet a can opener the sun will shine next". (p. 123)

His initial letters from France reflect naïve bravado common to U.S. soldiers before they had experienced combat. Commenting on his initial stint in the trenches, Leo says

Well I spent 12 days up there and believe me those 12 days were the greatest sport I ever enjoyed in my life. In fact, they ended too short...Now I expected to see some pretty tough times up there. Instead, it was the best time I had since I have been in the Army. Oh yea, plenty of shrapnel whistling around and the closer they would come to you the more sport it would be. (pp. 135–136)

After the war, however, we note a change in attitude evident in some of his letters. In February 1919, writing from his post in Germany in the Army of Occupation, Leo, speaking of himself and his fellow soldiers, writes: "We are not looking for any credit, and I doubt very much the fellows will do much talking when they get back. At least, I don't care to." (p. 236) In April 1919, referring to the Argonne, where he suffered a wound, Leo writes, "God I will never forget that place."
(p. 253) Leo was wounded in action at least twice, and he was hospitalized for the flu. He did not describe his wounding in great detail, no doubt in order to avoid upsetting his family.

Almost all of Leo's letters are lighthearted; there is not much mention of the horrors of combat. In fact, Leo writes comparatively little about his actual military duties. While this is a shame (it would have been interesting to learn about his daily duties as a bugler), his letters still provide a valuable insight into the life of a U.S. combat soldier during the war.

The author provides background and clarifying information throughout the book. He also includes photographs of Leo and his friends and family, and ephemera and memorabilia associated with Leo's service. Foster has done a valuable service in preserving and publishing his grandfather's letters; perhaps others will be able to do the same during this centennial year.