America and the Great War
Reviewed by David F. Beer

America and the Great War:
A Library of Congress Illustrated History 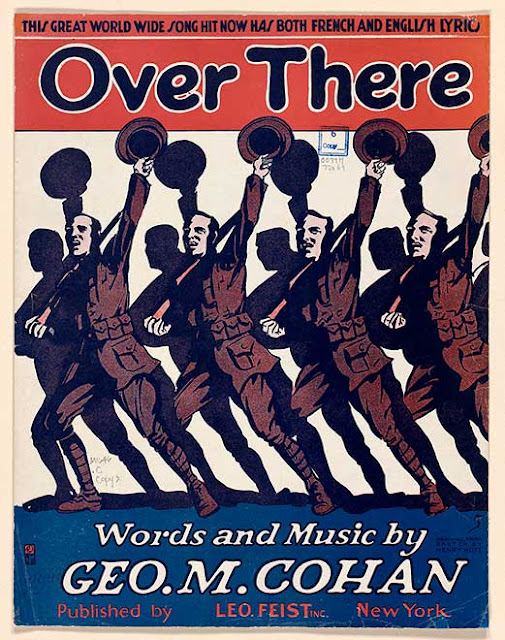 I was initially put off a bit by this volume, thinking it was "just another coffee table book." Then I opened it, started reading, and soon found how wrong I was. True, glossy books this size (9" x 11") and larger, with plenty of photographs and illustrations, do tend to come across as belonging on a coffee table or sofa to be seen by guests we want to impress, to inspire conversation, or to alleviate boredom when conversation flags.

But America and the Great War deserves no such disparagement. It's a 371-page attractive, thoughtful, and informative publication, with clear narrative and numerous rarely seen graphics. With a prologue, four substantial chapters, and an epilogue, Margaret Wagner effectively covers American politics, society, and military efforts from 1912 to 1918. This is backed up by detailed notes and a bibliography that reveals how thoroughly the author has made use of the almost limitless resources of the Library of Congress, where she is a senior writer and editor. Included in the book is an appendix detailing the World War I collections at the Library of Congress. I was amazed at the depth and extent of these ten separate collections, much of which is accessible online.

Many background themes emerge and expand in this book. We may be familiar with a lot of them, but Margaret Wagner provides surprisingly unfamiliar details and photos mined from her deep resources. Topics range from America's unreadiness for war—even on the Mexican border—to submarine warfare and the dilemmas of isolation and attempted neutrality. We follow the eruption of "war hysteria" and censorship with the invidious Espionage Act, mobilization, the rounding up of draft dodgers and "slackers," and, finally, victory. We meet men and women (several with now-unfamiliar names) involved one way or the other, for better or for worse, in the war movement. Cutthroat political maneuvering and revenge, huge war loans and profiteering, and cruel discrimination against "Negroes" and German-Americans are not spared. On the other hand, we also read of monumental efforts to help the needy in Belgium and occupied France.

Few of us are aware of the intense labor unrest and numerous strikes that took place during the war years, even if we're familiar with the Wobblies. Many additional organizations also took up the struggle, such as the International Brotherhood of Blacksmiths, the American Federation of Labor, and the National Civil Liberties Bureau. The latter, which broke from the American Union Against Militarism, was to eventually become the American Civil Liberties Union. Industrial magnates and politicians did not take kindly to any of these. The government itself experienced a frenzy of bureaucratic reorganizing and subdividing to cover every need that arose from the new order of things, and the military was not far behind with its more than 150 different procurement groups.

Our shortcomings in supplying our soldiers with uniforms, equipment, and skilled training when we entered the war were almost appalling, as Wagner illustrates. Congressmen angrily investigated the ongoing paucity of war supplies both at home and in France:

Where were the rifles needed for training draftees, many of whom were drilling with wooden sticks? Where was the artillery? Where were the planes?...Soldiers in overcrowded and unfinished training cantonments fell victim to flu, pneumonia, meningitis, measles, and mumps-often because they were inadequately protected…thousands of men went without overcoats in the dead of winter.[Meanwhile] in France the AEF's horses and mules were starving, there weren't enough blankets, gloves, or coats for the men, and some soldiers could not find boots that fit...on a forty-seven-mile Christmas Day march through a blizzard, badly shod men of the Rainbow Division left bloody tracks in the snow (p. 211).

Politicians also questioned the lack of shipping construction—after ten months and millions of dollars the Emergency Fleet Corporation hadn't produced one ship. And why weren't we supplying our troops with sufficient American-made artillery, aircraft, machine guns, and other vital war matériel? (p. 217) By the end of July 1918, the AEF had 1.2 million officers and men in France, yet most had never experienced combat and were still in great need of training. (p. 259)

General Pershing was aware of the situation of course, and the story of how events developed and changed to where America had a significant part in the outcome of the war is detailed and illustrated. Each of the AEF's combat actions is described and analyzed. President Wilson's Fourteen Points, the League of Nations, Versailles, and all the Byzantine politics, bargaining, reactions, and decisions that preoccupied many people at that time come in for discussion. The book concludes by looking at our brief involvement in Russia and the myriad changes that America had undergone by the time she emerged from the Great War.

America and the Great War: A Library of Congress Illustrated History is not only a splendid read but also a fascinating visual experience. As I stated above, the bibliography and details of the Library's holdings are additionally useful and impressive. Don't be put off by the price; it's not hard to find discounted editions. Even if I had a coffee table, I wouldn't put this book on it—this belongs on my shelves with the other significant publications on the Great War.