A Chaplain's View of WWI Combat, the Spanish Flu, and the Impact of War, Part 2 of 2 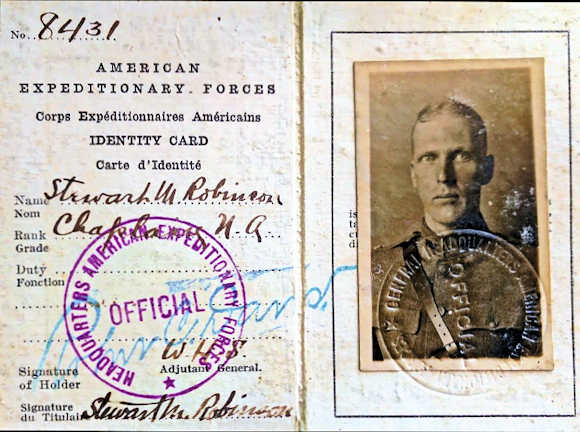 In Part 1, Chaplain Stewart Robinson described his duties with the 78th "Lightning" Division through the St. Mihiel Offensive until he was struck down with by the Spanish flu. He continues his account:

“Did not stay long in this #45. It is an evacuation hospital now and we were shot out on a French hospital train. I did not feel very well but the experience was novel and I enjoyed it. Towards evening I went to bed on one of the swing litters with the rest of the sick and wounded men. The French attendants took pretty good care of us. They fed us our supper. We reached our destination about 1 a.m. and I had a bath and went to bed.”

“A beautiful day. I did not feel so very lively and kept pretty well down in bed all day. The nurses are very nice to us. This is Base #26. The little village here is quite a center for hospitals. My malady seems to be slowly yielding to the treatment forthcoming. They do not give me much medicine. Perhaps they have only a very little. But I guess it is just as well. Being quiet here has awakened within me a great desire to turn my footsteps homeward.”

“Still this quiet life here continues and I keep on feeling better all the time. I keep thinking all the time of the chance of getting back home to work over there. I feel that this will doubtless be what will happen, because of the prayers of the dear folks back home. The fact that I can do just as much there as here and the fact that I want and pray for it myself. Things like that have worked out so before. God has a way of doing very wonderful things for those who love Him.”

“The ward is still under a quarantine for a case of meningitis that was discovered here. I am feeling much better and am anxious to get away from here now. The war is progressing in wonderful shape. I do believe that before so very long we shall see the end of it. How the world and longs for that day when peace shall come again. Perhaps this coming Christmas will see a day spring of a new era of peace in the world, built on a little more secure foundation than it has ever had before.”

“Awoke, dressed for breakfast and started to leave this place. I was scheduled to go to Convalescent Camp last night but they did not send for me. Today the camp was writing to pass me through immediately and wrote my orders for me to go to Chateau d’Aux, Louplande. Nobody knew where this place was, so I started for Dijon Cote d’Or, where I plan to spend the night. I will seek after this place in question and hope that it will be on the way homeward. That has become my ardent desire now. The Fall and cold weather bids me fly back to the sunny southland of home sweet home.”

“Arrived by train from the Gare de Montparnasse at and thence to La Suze at 4:30am. The local paper carrier took me out to the Chateau d’Aux (aka Villaines) in Louplande in a little donkey cart. The sight of the little village in the first streaks of dawn. When we reached the edge of the estate another pretty sight greeted me in a little stone house from whose chimney the smoke curled and whose door and window gave forth a fresh pink glow. Chaplain Moody came down and said I was to go back to my division (78th). Well, we will hope for the best.”

In Mid-October the 78th Division was transported from the St. Mihiel Sector to the left flank of the American First Army which was in the midst of the Meuse-Argonne Offensive.

“Slept in a French freight car on the floor with some thousands of loaves of bread. Morning dawned cold and wet. A company of railway engineers gave me some breakfast and I had my first ride in an American locomotive run by a man who used to run from to . We ran from Clermont to Aubreville. There I caught an ambulance going to the 78th. Late in the evening we reached Lancon, where I met Colonel MacMillian, who took me over to Chatel to P.C. A mine blew up at 1 a.m. and a shell or 2 lit in the edge of village. So goes life.”

“Found my work in a pretty complete state of confusion, thanks to the many changes which had happened in my absence. There have been many changes in the HQ. The prospect is not overly bright for the future. Rode down in the evening with MacDonald. About 45 seconds after he drew his truck out of a barn door where it had been standing a shell sailed in right on the spot.  We reached Les Islettes and found a place to sleep with some of the supply train. They had a nice fire which was very acceptable and brightened up the evening.”

“Did not need to get up this morning. One of the patients in the shock ward died during the wee hours when I arrived. He had lost an arm and his leg had a horrible wound fully three inches deep and nearly a foot long. I held his head on Sunday while his leg was dressed. It was agonizing to see his face written all over with signs of extreme pain. The agony and suffering of this awful thing passes all imagination. I am tired of the thing and I have barely seen the fringe of the thing. We are in the midst of God’s great testing by fire. I trust Him for all things.”

“Went out over the hills to the front, visited 115 Brigade reserve, 155 P.C. and went up into St. Juvin. We hold one end of this little village and the Boche is in the other. He was trying to blow up the little bridge by which one had to get into town. It was a pretty strenuous time and I was assured anew that God takes care of us. They (shells) fell inside of 50 yards of me. They were big ones and whistled painfully. The trip was in the line of duty and I was delivered from great danger. God is able to keep me and use me through all the days of my life. I can trust Him. I must dare to do so.”

At the end of the month, Chaplain Robinson is ordered to a Services of Supply Base at Brest on the French Coast.

“Arose at leisure-Went out to Lambezellec and had a funeral. There are thousands of graves out there of men had influenza and died when they landed here. In p.m. I looked over some of the features of Casemate Fautras where some of my work is to be done. Had supper and went to the movies with Sledge, a very genial Southern Baptist chaplain. The movies were American and one was very funny and I laughed more than I have all summer. The little nascent moon hung in the West. I felt a premonition of home by the week.”

“Held service at . Had dinner with I 2nd Pioneers. Took bath in the p.m. Went to Officers’ Club in even. and enjoyed a very fine turkey dinner. Met Wm Larimer Jones II of 1915 on street. He was just in town from the U.S.S. Dekalb and gave the heartening news that she had no chaplain. This may be the slant I have been praying for. I had another feeling today that an advance towards home was about to come to me. Wired GN> regarding matter. Heard that Esther is up at St. Malo a port not such a great distance from here. I pray I may be about to leave for home.”

Stewart Robinson spends the next four months hoping for a timely return home. He finally sails on 25 February 1919.

"Went up on deck right after breakfast and sighted land at about nine o’clock. All the moments thereafter were spent in eagerly looking for new things on the shore or in the water. We came along through the Bayand along the buoyed channel to the upper way past the forts and past the Statue of Liberty.

We docked at one o’clock and as soon as we came out of the dock I saw Anne MacGregor and the folks waiting behind the gate. We had a cursory examination for bugs and creeping things and then were able to get out to see the impatient dear ones. It was a very happy sight for there were many little parties like our own.

Caught 5 p.m. train for and spent a thankful and happy evening and went to bed at peace and full of a very great and deep thanksgiving to God."

"Spent the whole day in the house unpacking and visiting. It was one long happy hour with no thought of time or obligation. I wired for permission to report on Monday at where I am to go to be demobilized. This request was granted and this added to the joy of the day In the evening Anne MacGregor and I walked over to see Grandfather who is sick in the hospital.

There seems to be a few jobs on the horizon into which I may have a chance to insinuate myself. One possibility is the chair of English Bible at . This seems like a large thing to be put in my way at this stage of the game but I do believe that I could make a success of this very piece of work. I wonder if God has this bit of work for me. I will wait, work and pray."

After WWI, he pastored Presbyterian congregations in Cleveland, Ohio, Lockport, NY, and Elizabeth NJ, until retirement in 1961. For 12 years he edited, The Presbyterian, an independent journal published in Philadelphia. After WWII, 1951–53, he served as Chairman of the Army-Navy Chaplains Commission, visiting troops during the Korean War. He authored a monograph on the influence of colonial clergy on the American Revolution. His papers are archived at the National Archives, Princeton University and Princeton Theological Seminary.

Thanks to Dave Robinson of McLean, VA, for bringing his grandfather's diary to our attention.