The name Sydney is one of the most famous ever carried by an Australian warship. The first Sydney was a Town Class light cruiser; one of three ordered in 1910 which were part of the initial Australian fleet unit. Traditionally cruisers were the most versatile element of a naval force. A cruiser’s role was to go anywhere and to do anything and they were to prove particularly useful in the role of trade protection and scouting duties. The Town Class cruisers were really a group of classes, each representing a steady improvement in seakeeping and warfighting capabilities. Sydney (I), Melbourne, and Brisbane belonged to the third group known as the Chathams. These incorporated a side belt of 3-inch armor to improve protection against high explosive shells, while better stability resulted in increased accuracy of their gunnery.

The first cruiser laid down for the RAN was Sydney (I) which was launched in August 1912 by Lady Henderson, wife of Admiral Sir Reginald Henderson. She commissioned at Portsmouth on 26 June 1913 under the command of Captain John CT Glossop, RN. She departed Portsmouth on 25 July 1913 and first arrived on the Australia Station at Albany on 19 September 1913. On 4 October 1913 she formed part of the Australian Fleet Unit that ceremonially entered her namesake harbor to a rapturous welcome from tens of thousands of spectators who turned out on the shores of the harbor to welcome the arrival of ‘their’ fleet.

Following a period spent in eastern Australian waters, Sydney (I) proceeded to Singapore in March 1914 to meet and escort to the two new Royal Australian Navy submarines, AE1 and AE2, which were en route to Australia from England. Sydney (I) spent the remaining months of the prewar period working up in Australian waters. 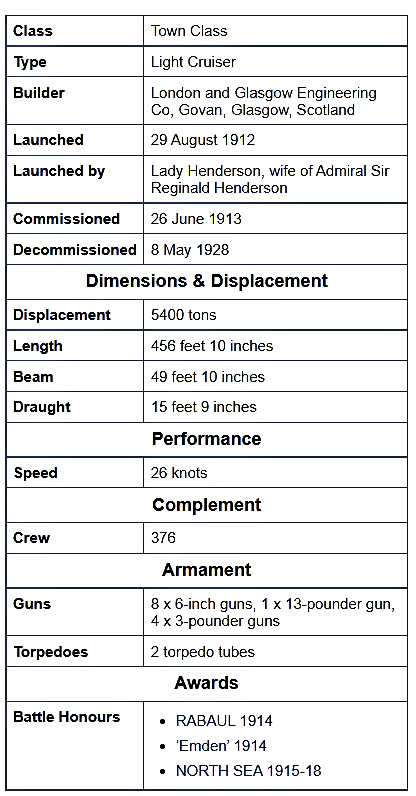 The days preceding the outbreak of war in August 1914 found Sydney (I) in Queensland waters. On 3 August 1914 she was joined at Townsville by the destroyers HMAS Warrego and Yarra before proceeding north to form a unit of Admiral Patey's Pacific Squadron.

Following the outbreak of war on 4 August 1914, Sydney (I) operated in New Guinea and Pacific waters and in the brief campaign against the German Pacific possessions during which she carried out a series of punitive patrols. Highlights during this period included the capture of Rabaul (9 to 11 September 1914) and the destruction of the Angaur Island Wireless Station on 26 September 1914.

In October 1914, Sydney (I) and her sister ship Melbourne detached from the Flagship HMAS Australia, and returned to Australia to form part of the escort for the first ANZAC convoy which consisted of some 38 transports. The convoy’s escort comprised Sydney (I), Melbourne, HMS Minotaur and the Japanese cruiser Ibuki. The convoy sailed from Albany on 1 November 1914 and on the morning of 9 November 1914 was steaming some 50 miles east of the Cocos Islands.

At about 06:20 on 9 November, wireless telegraphy (W/T) operators in several transports as well as in the escorting warships received signals in an unknown code followed by a query from the Cocos Island W/T station, 'What is that code'? It was in fact the German cruiser Emden under the command of Captain Karl von Müller, ordering her collier Buresk to join her at Point Refuge to coal. Shortly afterwards, the Cocos Island telegraphists signaled 'Strange warship approaching’ followed later by the same message prefixed by ‘S.O.S.’ — the international distress call. 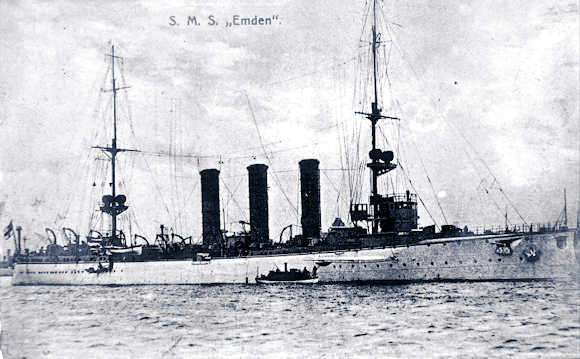 Emden had by then anchored in Port Refuge and immediately dispatched a landing party, under the command of Lieutenant Commander Von Mücke, with orders to destroy the cable and wireless stations.  As Von Müller patiently awaited the return of his landing party, smoke was sighted on the horizon which was at first assumed to be the Buresk. Soon afterwards the masts of the approaching ship were recognized as those of a warship. The ship Von Müller had spotted was Sydney (I) which, as the nearest warship to the Cocos group, had been ordered by Captain Silver in Melbourne to proceed at full speed to investigate. By 07:00 Sydney (I) was 'away doing twenty knots' and at 09:15 had simultaneously sighted the island and the Emden some seven or eight miles distant. At first Captain Glossop could not tell whether the ship sighted was Emden or the Königsberg, both of which were thought to be at large in the Indian Ocean at that time.

Continue the story of Sydney's pursuit of Emden here: