Who Was Sir Hall Caine?

Sir Thomas Henry Hall Caine, C.H., K.B.E., was born in Runcorn in 1853. His books sold in their millions, outselling his contemporaries, and he was mobbed by crowds of adoring fans wherever he was recognized. He wrote novels, plays, short stories, film scripts and works of non-fiction. Many of his novels were turned into films (all black-and-white silent movies), including The Manxman by Alfred Hitchcock.

Caine was 61 at the outbreak of World War I. The British secretly set up the War Propaganda Bureau under the MP Charles Masterman, and Caine was one of 25 leading authors Masterman invited to the Bureau's London headquarters in 1914 with the purpose of best promoting Britain's interests during the war. Shortly after, Caine was one of 53 leading authors in Britain to sign the Authors' Declaration, a manifesto drafted by Masterman stating that Britain "could not without dishonor have refused to take part in the present war." Following the "Rape of Belgium."

Caine edited King Albert's Book in support of the exiled King Albert of Belgium. The book was Caine's idea and was published in Christmas 1914 by the Daily Telegraph. The proceeds from the book, £20,000, went to the Daily Telegraph Belgium Fund, created to support British efforts to receive and maintain Belgian refugees in Britain. Caine invited 250 of the most notable people of the time including authors, artists, composers, and statesmen to present their view of the events in Belgium. In 1918 King Albert of Belgium made Caine an Officer of the Order of Leopold of Belgium for his efforts. Caine's portrait by the Belgian painter, Alfred Jonniaux, was presented to him by the Fine Art Department of the Belgian Government.

Caine wrote extensively for the English, American, and Italian newspapers. He claimed that by this work, and his personal influence with Italian statesmen, he greatly helped to bring Italy into the war on the side of the allies. President Woodrow Wilson had declared the United States neutral and his policy of neutrality was enormously popular with the American people. Caine urged America to join the war by writing articles, mainly for the New York Times, and in 1915 he gave a series of lectures in the United States. 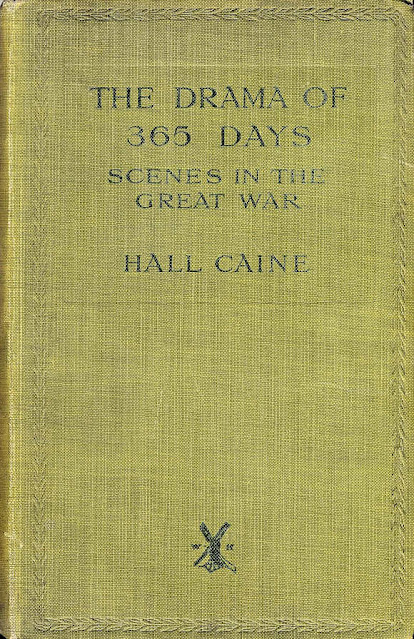 In 1915 a collection of WWI articles that Caine had contributed to the Daily Telegraph was published as a book entitled The Drama of 365 Days: Scenes in the Great War. In 1916 Caine was invited to work with Lord Robert Cecil at the Foreign Office toward the creation of the League of Nations after the end of the war. Our Girls: Their Work for the War was published in December 1916, consisting of a series of Caine's articles written for the Ministry of Munitions, together with additional stories about the working lives of women in the factories and in the hospitals. It was designed to be a gift for munitions girls to send to their men at the front.

The National War Aims Committee was set up in 1917 to focus on domestic propaganda. Caine was recruited for the committee by Prime Minister David Lloyd George to write the screenplay for the film Victory and Peace, designed to show what would happen in a German invasion. Most of the negative of the newly finished film was destroyed in a fire at the offices of the London Film Company in June 1918. It was re-filmed over four-months, just as the war ended, and was therefore never released.

Toward the end of 1917 Caine was offered a baronetcy in recognition of the contribution he made to the war effort as Allied Propagandist and his position as a leading man of letters. Caine declined the hereditary peerage and accepted a knighthood instead. He was made Knight Commander of the Most Excellent Order of the British Empire (KBE), insisting on being called, not "Sir Thomas" but "Sir Hall." Caine died in 1931 at his home, Greeba Castle, on the Isle of Man.