Deathwatch: Deliver Them from Evil 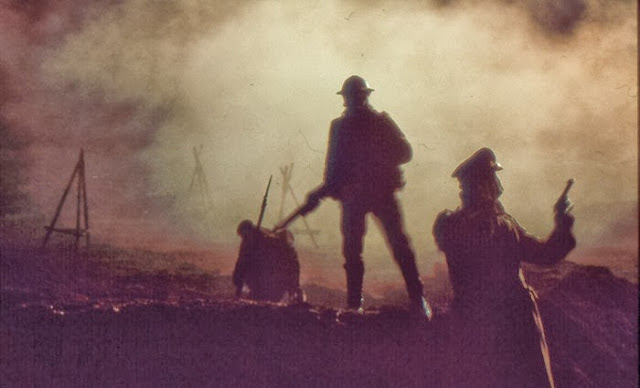 Our regular contributor on literary matters, David Beer—in his usual serious and insightful manner—has contributed, a review of what is, to our mutual understanding, the only known cross-genre World War One/Zombie film, Deathwatch, for our special Halloween posting.  David's review, which focuses on the movie's religious implications, stands alone and is worthy of your attention.  However, after your editor read the draft of the review, he came to the conclusion that David, who is usually au courant with the latest developments in popular culture, had overlooked (or chosen to avert his gaze from) a dimension of the film that is part of a truly big phenomenon these days.  His review sidesteps the "living dead," that is to say, the zombie, elements of Deathwatch. While being a little subtle in its "Z" symbolism and avoiding any use of the "Z" word in the script,   Deathwatch, nevertheless, has earned a place on various lists of "Best Zombie" productions—right up there with Walking Dead,  World War Z, and my personal favorite, Zombieland.  Since David passed over the zombie clues in his review, your editor has supplemented his text below with stills from the film that capture the film's zombie essence.  MH

This film brought to mind two lines from the last poem Isaac Rosenberg wrote before he was killed in action. The poem, “Through These Pale Cold Days,” describes suffering soldiers and states how "They see with living eyes/How long they have been dead." This is about as close to a spoiler as I want to go in discussing this horror film based on WWI. The surface plot is easily described. A group of British soldiers go over the top at night into the face of intense machine gun fire and exploding shells. Several standard trench warfare motifs are provided: the fear before the attack, the youngest soldier panicking and refusing to go over until threatened at gunpoint by an officer and helped by a sympathetic comrade, tangles of barbed wire to negotiate or get caught up in, mud containing bloated corpses, and the inevitable mowing down of men by the enemy’s furious fire power.

It’s almost unbelievable that anyone could live through such a "stunt" but surprisingly the next scene shows a group of apparent survivors trudging over no man’s land in thick fog that they mistake for gas. When they discover it’s only fog and remove their masks, one soldier wonders what happened to the night—he can’t understand how it suddenly became light. Apart from the ominous and eerie background music we've heard from the beginning of the film, this is the first hint we get that all is not normal. Further hints will occur, however, such as a compass that no longer works, barbed wire that seems to have a life of its own, and blood that seeps from the mud in the German trench the survivors now occupy.
All but one of the Germans in the trench are dispatched quickly enough, but not before it’s apparent that they are paralyzed with fear not of the British soldiers but of a nameless and invisible force that has already been decimating them. They try to warn the British about it but to no avail. Gradually it overcomes all but the youngest and most innocent soldier, named Charlie Shakespeare, who in the end is able to leave the dark trench and walk out into the light—but not before he glimpses all his dead comrades sitting around a fire in a dark corner of the trench, seemingly alive.

To arrive at an understanding of what director/writer Michael J. Bassett seems to have in mind in this film (and it’s admittedly open to interpretation) we have to absorb numerous oblique hints. Why, for example, is the subtitle of the film “Deliver them from evil”? Why the quick focus on a cross one of the soldiers is wearing?  What is the significance of the Bible passage read over the pile of corpses? What are the ghostly voices that are heard at one point above the trench? Why such comments by the soldiers as "There’s so many dead," "God isn't here," "We are still alive," "We’re dead, Charlie, I know that now," and Charlie Shakespeare’s exclamation as he leaves the trench after seeing all his dead comrades sitting around a fire—"I’m not dead!"? And what do we make of the German soldier at the very end waiting, with a knowing look in his eyes, for the next squad of British soldiers who are about to occupy the trench?

Film enthusiasts will enjoy Deathwatch—even though it’s considered a fairly low-budget B film — not only for its combination of supernatural horror mixed with a WWI movie, but also for the parts played by actors such as Andy Serkis of Planet of the Apes and Lord of the Rings among other accomplishments, by Jamie Bell as the young and decent Charlie Shakespeare who had lied about his age to get into the army, and by Laurence Fox, whom I last saw as Inspector Lewis’s assistant in the spin-off of the Inspector Morse series. No spoilers, or not too many, I hope, in this short review, but I can’t help concluding with part of another poem this film brought to mind—the opening lines of Wilfred Owen’s “Strange Meeting”:
It seemed that out of the battle I escaped
Down some profound dull tunnel, long since scooped
Through granites which Titanic wars had groined.
Yet also there encumbered sleepers groaned,
Too fast in thought or death to be bestirred.
Then, as I probed them, one sprang up, and stared
With piteous recognition in fixed eyes,
Lifting distressful hands as if to bless.
And by his smile, I knew that sullen hall,—
By his dead smile I knew we stood in Hell.