Map Series #22—The Great War in Asia and the Pacific

The Asian and Pacific Theatre of World War I in good part involved a conquest of German colonial possession in the Pacific Ocean and China. The most significant military action was the careful and well-executed Siege of Tsingtao in what is now China, but smaller actions were also fought at Bita Paka and Toma in German New Guinea. All other German and Austrian possessions in Asia and the Pacific fell without bloodshed. Naval warfare was common; all of the colonial powers had naval squadrons stationed in the Indian or Pacific Oceans. These fleets operated by supporting the invasions of German-held territories and by destroying the East Asia Squadron.  Troops from Australia, New Zealand, India, Southeast China, and China proper were also sent to support the Allied efforts in the Middle East and Western Front. A nice summary of the the various operations in this theatre can be found at MILITARY WIKI. 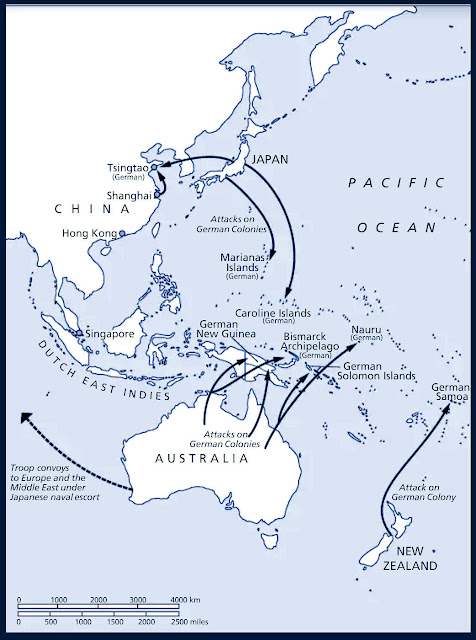 Source: Cambridge History of the First World War, Vol. I