A VC for Sounding "Charge" 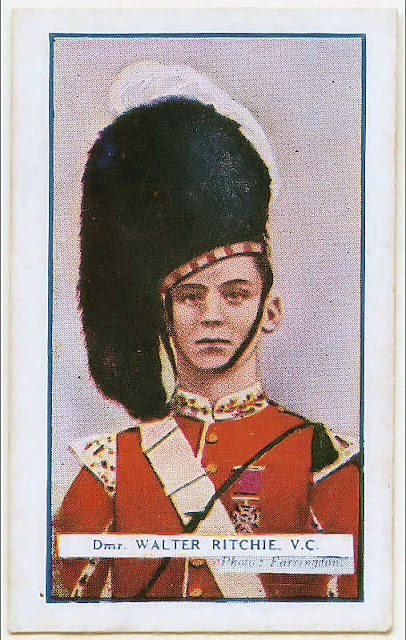 Drummer Corporal Walter Potter Ritchie (1892–1965) 2nd Bn, Seaforth Highlanders, was awarded the Victoria Cross for his actions on the first day of the Battle of the Somme.

For the award of the Victoria Cross

For most conspicuous bravery and resource (North of Beaumont Hamel), when on his own initiative he stood on the parapet of an enemy trench, and, under heavy machine gun fire and bomb attacks, repeatedly sounded the "Charge" thereby rallying many men of various units who, having lost their leaders, were wavering and beginning to retire.

This action showed the highest type of courage and personal initiative. Throughout the day Drummer Ritchie carried messages over fire-swept ground, showing the greatest devotion to duty.

Walter Ritchie was invested with his Victoria Cross by King George V at Buckingham Palace on 25 November 1916. He eventually made Drum Major  and left the Army in 1929. He died in Edinburgh on 17 March 1965.