Boy Soldiers of the Great War 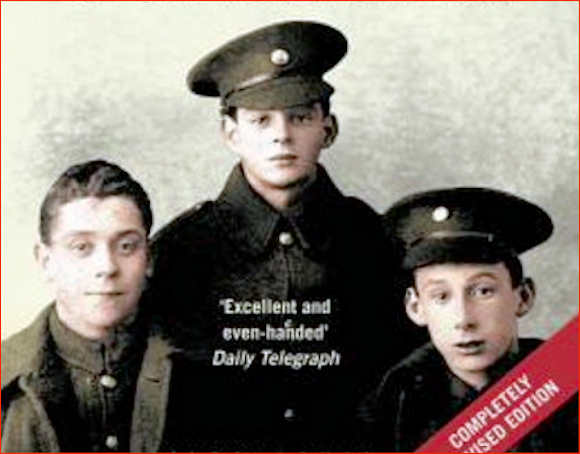 How would you feel in 1914 if you were the parent of a 12- to 17-year-old boy who wanted nothing more than to join the army and get to France to be in the fighting? Would you encourage him, be glad to get rid of him, vacillate, or be adamantly opposed? Whatever your reaction, it shouldn’t surprise you if your young son wanted to go—after all, he had grown up in a post-Victorian generation of war romantics:

War, glorious war, with its bands and marching feet, its uniforms and air of recklessness, its heroes and glittering decorations, the war of our history books…From the cradle up we have been fed on battles and heroic deeds, nurtured on bloody episodes in our country’s history; war was always glorious, something manly, never sordid, uncivilized, foolish, or base. (p. 9)

So go they did, from 1914 to 1918, in the tens of thousands and cheerfully lying about their age. In this, the final update of his study of boy soldiers in the Great War, Richard Van Emden makes use of previously unknown information to describe the numbers, conditions, and various adventures and fates of the boy soldiers Britain was often willing to absorb into her wartime army.

Getting into the army was not really a problem. Birth certificates were rarely required. Staff were paid a bonus for the number of recruits scooped up. You could avoid a scrupulous recruiter or medical officer by going to another town—or across town to another recruiter. One medical officer admitted that “We had orders not to be too strict in our physical examination” (p. 40), and this lenient attitude easily transferred to matters of age. The moral quality of some of these young soldiers didn’t necessarily parallel their eagerness to enlist, however:

It is not your ‘good’ boy who rushes to the recruiting office and tells a lie about his age, it is not the gentle, amiable, well-mannered boy who is so enthusiastic for adventure that he will leave his home and endure the hardships of a soldier’s life for the sake of seeing fighting. These boys were for the most part young scamps, and some of them had all the qualities of the guttersnipe, but they had the makings of men in them if treated properly. (p. 298)

And many boys did find their way to manhood in the army. Their trials and tribulations and numbers are described and annotated in depth in Van Emden’s book. Many would soon be found fighting in the trenches and in some of the bloodiest battles of the war, including Gallipoli. Thousands died in combat, while many others survived the war after acquitting themselves honorably and even valiantly. Some were awarded medals for gallantry and a handful became respected officers—at the age of fifteen.

It’s not hard to find the gravestones of boy soldiers in the battlefield cemeteries of France and Flanders, and the author has headed each of his 20 chapters with a parent’s inscription that appears at the foot of a gravestone:

Boy Soldiers of the Great War is almost encyclopedic in its details and statistics. Estimated numbers of deaths of boy soldiers for each year of the war is given. The final chapter of this 467-page volume is devoted to short biographies of “The Youngest of the Young” who died, and the final pages list the youngest army officers (including one naval officer) who were killed or wounded, for the most part 16- and 17-year-olds. An interesting entry is that of Second Lieutenant George MacKelvey Morris of the Liverpool Regiment, from Toledo, Ohio, and a U.S. citizen. He died of wounds in France, aged 16 years and 221 days.

Besides the statistics and numerous tales of youthful heroism, this book also contains fascinating accounts of how many lads were returned to their homes from France at the request of their parents. This could be a complicated process, which included sending a copy of a birth certificate to the War Office and providing other materials showing a boy to be underage and perhaps unfit (according to a parent). Camps were set up as a sort of halfway house or "holding pen" for boys in the process of being sent home. On at least one occasion, not surprisingly, perhaps,

They rioted. Every window in the place was shattered. Everything breakable was smashed into little bits. A YMCA worker, a young man lent to us…fled to a small room and locked himself in. The tumult became so terrific that an officer of high standing and importance…sent an orderly to us with threats. (p. 300)

Yet for the many who were troublesome there were just as many young lads who matured quickly on the battlefield, were a credit to their units and helped win the war. This book is a testimony to them as much as it is a critique of the mistakes and misadventures involved in a desperate nation’s gathering as many bodies as possible to go off to fight. Typical of many of the young heroes is this description given by a chaplain at the 23rd General Hospital in Etaples in a letter of 7 August 1915:

“Did I tell you a boy came in yesterday. He will be fifteen next month. He was out a long time and is now wounded. He doesn’t want to go back to England but wants to have another go at the Germans…” (p. 412)

We can only admire, from a great distance, the valor and grit of such young lads.