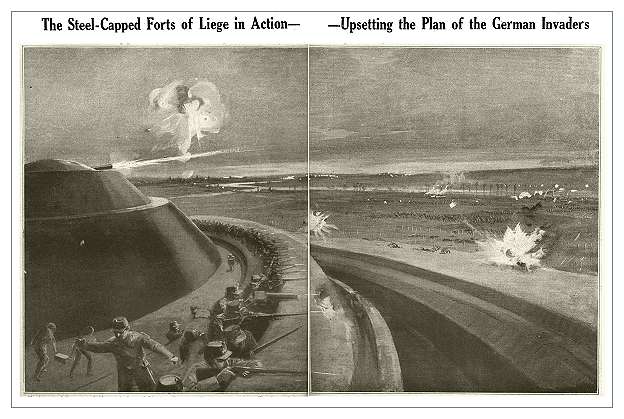 Joe and Janet Robinson (esteemed members of the World War I Historical Association), accompanied by Randal Gilbert, have given us another excellent, inspired work about events at the very beginning of the Great War.  This book complements their other works, The Great War Dawning and The Last Great Cavalry Charge, in that it highlights the ineptitude, driven by over-confidence and prejudice, of the German General Staff or GGS at the beginning of the war.  As with the authors’ other books, the pages are crammed with statistics which justify the use of the word “disastrous.”

Our readers know quite well the story of the Schlieffen Plan that most historians see as the plan the GGS executed at the war’s beginning.  In a nutshell, the GGS launched four armies into Luxembourg and Belgium with the idea of pivoting on the Belgian plain to march south and envelop the French army, which was supposed to be pinned down in front of Alsace-Lorraine by the Crown Prince’s Fifth Army.  Schlieffen had devised this plan in the late 1800s and early 1900s based on his obsession with Hannibal’s battle against the Romans at Cannae in 216 BCE.

In that obsession, Schlieffen missed some glaring facts. First, Cannae was a battle of relatively small forces and on a very small battlefield.  Second, both sides were pitting their entire armies within sight of the commanding generals. Third, there were few logistical problems. In Schlieffen’s scheme, rivers were crossed over intact bridges, supplies followed on strong rail connections, men marched without regard to speed and endurance, and the intermediate enemy, the Belgians, offered no appreciable resistance. As the authors point out, one should never assume away the opponent or the logistics.

As the years after Schlieffen’s retirement progressed, the plan took on new aspects.  Its initial execution called for the violation of Belgian and Dutch neutrality.  The new chief of the GGS, Helmuth von Moltke, the Younger, found that the idea of violating both countries’ neutrality to be risky. Belgium was of no consequence, but the Netherlands was another story. If that country became an opponent and Britain imposed a blockade, then Germany would have no way of tapping into American resources for a continued war. Judiciously, he set aside an invasion of the Netherlands along the Maastrict enclave. There had been method to Schlieffen’s concept. By invading the Netherlands, one army could avoid confrontation with the strong fortresses of Liège and Namur. Von Moltke’s modification required that two armies, by avoiding the Netherlands enclave, pass between the Liège and Namur fortress complexes—a very tight fit considering that each would have to use the same roads.
To support this modification, the GGS came up with a plan, specified as Handstreich or Coup de Main, for taking the Liege complex before the invading armies would pass before its cannons. The sensitivity of such a plan is obvious and, as a result, it was kept secret from everyone including the six brigades which would have to execute it. In that secrecy was the beginning of the rub which would fester into a disastrous rash.
The Robinsons and Gilbert are quick to point out that the German force, comprised of peacetime strength units which are often half of war strength, was not to wait for mobilization to fill its ranks. As soon as war was declared, they were to jump off.  That meant bringing them up to the frontier long before war was declared. These were to be the first soldiers across the border. And things got more complicated. The Belgians, surmising that an invasion was imminent by the tone of the German ultimatum to let its armies pass without resistance, had already begun the destruction of bridges, rail lines, tunnels, and the clogging of roads with all kinds of impediments, plus bringing up reserves to fortify the fortresses and specifically Liège.

The authors glean information from German regimental histories with the hands of surgeons extracting vital data and developing it to show the day-by-day operations of both sides in that struggle. I was amazed to find not only dates but times for arrival, receiving fire, and withdrawals to safer positions. I could feel the frustration of trying to meet a timetable in capturing Liège as well as the desperateness of the defending force. Modern play by play sports commentaries pale in the light of these pages. There are excellent and numerous maps which actually have the villages that are referenced in the text.

This book is a must for the shelf of Great War enthusiasts who read this blog. It is concise, highly detailed, and a pleasure to read. I particularly enjoyed the part Erich Ludendorff, the man who would go on to nearly rule Germany after 1916, played in securing Liège. It was less dramatic than Ludendorff’s own description that he laid out in his autobiography. But above all, I appreciated the exposure of the ineptitude of the GGS at the beginning of the war.  Operations then were not of scalpel cuts but ones of smashing hatchets.