One candidate for the title "World's Most Spectacular Battlefield" is certainly Monte Piana, located about 12 km northeast of the ski resort of Cortina, Italy. At least it has some of the most dramatic views for the poor guys stuck in the trenches. Its aesthetic value derives from its confirmation—Monte Piana is a high plateau, mostly flat—but lower than the surrounding mountains, which are some of the most impressive of the Alps. 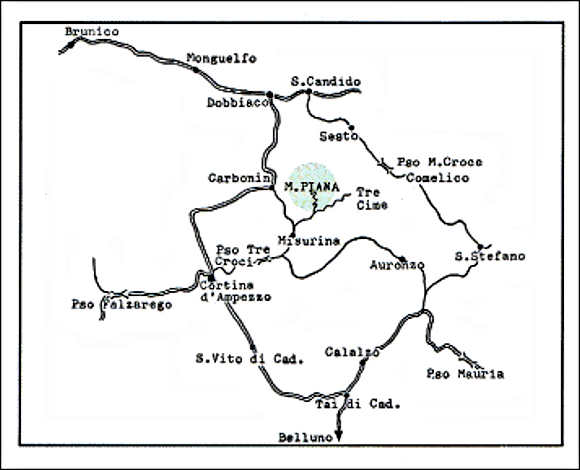 During the First World War Austrians and Italians fought each other atop Monte Piana (7,625-ft elevation on the southern peak). This mountain of the Sexten Dolomites range was the scene of a slow but gruesome attritional war. The area overlaps the former 1753 frontier between the Republic of Venice (Serenissima) and Tyrol. A boundary stone is still visible on site.  Consequently, it was accessible to both sides at the opening of the war on the Italian Front.  Also, anyone force controlling its flat top had a 360-degree view of  the activity in several passes through the nearby range. A more desirable observation outpost could hardly be conceived.

Immediately after the war's outbreak, in early June 1915, the troops of Standschützen tried to gain the dual summits. Heavy casualties took place on both sides and resulted in a stationary front line with the mountain's north summit occupied by the Austrians, the southern (slightly higher) summit by the Italians. The two sectors were split by a deep ditch named the Valley of the Castrati by the soldiers. The outposts, trenches, and tunnels of the opposing sides were only a few meters apart in places. This made for the worst kind of attrition warfare, with raids, sniping, and random bombardments, all intended to push the opposing forces off the plateau, but which neither side could allow. The situation stabilized until the Italian defeat in the October 1917 Battle of Caporetto forced the entire front south. Fourteen thousand soldiers, Italians and Austrians, lost their lives on this single mountain over a span of 30 months.
In 1977 the Dolomitenfreunde, a group of volunteers headed by Walther Schaumann, restored the trenches and the former positions of the two fronts and the resulting path is now a really instructive and easy itinerary with breathtaking views appearing on each side. A jeep/snowcat shuttle is operated from nearby Lake Misurina to a refuge near the summit.
Source:  La Granda Guerra