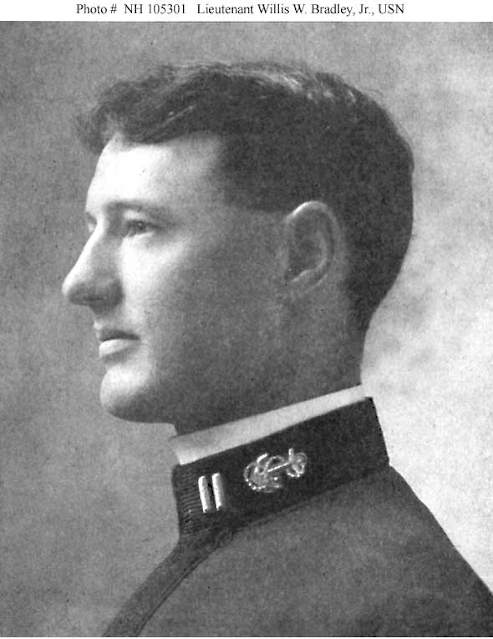 The first Medal of Honor recipient during World War I was a naval officer from North Dakota. On 23 July 1917, Lt. Willis W. Bradley undoubtedly saved his ship, the armored cruiser USS Pittsburgh, when ammunition cases exploded as they were being loaded into the ship's artillery enclosure.

Bradley was blown back and temporarily knocked unconscious, but he crawled back into the burning enclosure after regaining consciousness. He saved a sailor and extinguished the burning materials located next to "a considerable amount of powder," preventing further explosions and likely saving the ship and crew.

Bradley was born on 28 June 1884, in Ransomville, New York, to Dr. Willis and Sarah Anne (Johnson) Bradley. When Willis, Jr., was only a few days old, the family took a train to Milnor in Dakota Territory. The family eventually settled in Forman, where the doctor established his medical practice. Because there was no high school in Forman, Willis, Jr., was sent to Hamline University preparatory school. He also took courses at the Archibald Business College and the Curtis Commerce College in Minneapolis. During the summers, he was deputy registrant of deeds for Sargent County.

His life changed, however, when in 1903, Bradley was appointed to the U.S. Naval Academy, which would lead to a long and interesting naval career. After graduating first in his class at Annapolis, Bradley was assigned to the battleship USS Virginia for sea duty and participated in the world tour of the Great White Fleet.

After the World War, he served and commanded a number of ships and land installations, such as the Pearl Harbor docks, and took assignments with the Bureau of Ordnance. Bradley even served two years as governor of Guam. During World War II, he was commander of the Naval Inspection and Survey Board, with headquarters in Long Beach, California.

In August 1946, he retired from the Navy after 40 years of service. During 1947–1949, Bradley was elected as a representative of the Eighteenth District of California as a member of the Eightieth Congress of the United States. Willis W. Bradley died on 27 August 1954 and is buried at Fort Rosecrans National Cemetery, San Diego, California. The USS Bradley (FF-1041), which was in service 1965–1988, was named in honor of Captain Willis W. Bradley.