Franchet d'Espèrey: Hero of the Marne and Victor of the Balkans 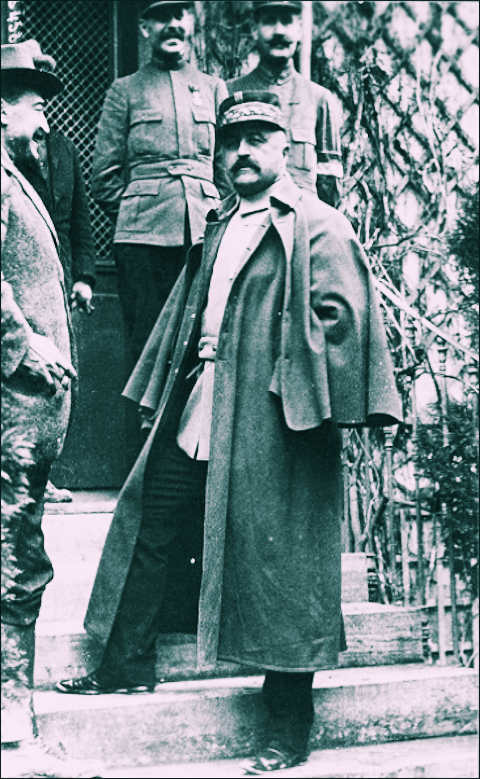 General Louis Felix Marie Francois Franchet d'Espèrey (1856–1942) had the most misleading nickname ("Desperate Frankie") of any leading figure of the First World War. "Driven," "Intense," or "Domineering" Frankie would have been a more apt description of the man who would lead the Allies to a decisive victory in the Balkan theater. He graduated from Saint-Cyr (1874–1876), where he was one of the best officers in his class. He was first appointed to the 1st Tirailleurs Algériens and 1st Étranger in Algeria until 1885 (with a brief internship at the École Supérieure de Guerre). From April 1885 to May 1887, he served in the Tonkin region for two years, fighting against the Black Flag Army and taking part in the campaign along the Black River and the Red River. He also took part in the occupation of the Tonkin and the Annam. After brief service in Fontenay le Comte and Paris (1887–1890) as well as Tunisia (1890–1893), he became the ordnance officer of Freycinet (Président du Conseil, War Minister) and served in the garrisons of Toul, Stenay, and Nancy. He participated in another campaign in Asia in 1900–1901, this time against the Boxer Rebellion.

Back in France, he was successively appointed colonel, commanding the 60th Infantry Regiment in 1903, commander ad interim of the 77th Brigade, and chief of corps of the 29th, 143rd and 163rd Infantry Regiment. In March 1908, he finally became a general, commander of the 77th Brigade. Driven by his interest in the “Eastern Question”, he traveled to the Balkans many times during his annual holiday and even met Austrian Chief of Staff Franz Conrad von Hötzendorf (1852–1925) in Trieste after a trip to Dalmatia. He was named commander of the occupation forces in Morocco in 1912, taking part in the pacification of the newly created French protectorate.

On the Western Front

In August 1914, Franchet was at the head of the 1st Army Corps (Fifth Army), which he had been commanding since 1913. His war career saw greatly mixed fortune, and was similar in some ways to that of British general Sir Edmund Allenby. His war began in command of I Corps which formed part of General Lanrezac's Fifth Army at Charleroi.  Having played his part in successfully defending Fifth Army's right (thereby disrupting the German Schlieffen Plan) d'Espèrey was handed command of Fifth Army itself with Lanrezac's removal as commander (for displaying a want of "offensive spirit").

Thus d'Espèrey was in place to lead Fifth Army in time for the critical First Battle of the Marne in September 1914.  Victory there led to promotion in command of Eastern Army Group, again on the Western Front. With Joseph Joffre's delicately managed removal as commander-in-chief in December 1916 (where the famed and popular commander was given a "promotion" to marshal) d'Espèrey's name was considered as his replacement. However, d'Espèrey's staunch Roman Catholicism acted against him among French army anti-clerical circles and the post went instead (disastrously) to Robert Nivelle.

Appointed commander of the Army Group in Champagne throughout 1917 d'Espèrey was as ardent a supporter of offensive warfare as Joffre before him.  This led him to defy orders to adopt so-called elastic "defense in depth" during the great German spring push of 1918.  Consequently the Germans succeeded in securing significant gains during the May 1918 Ludendorff Offensive launched from the Aisne, for which much of the blame can be (and was) assigned to d'Espèrey. He had worn out his welcome on the Western Front. He was recognized, however, as a commander who who recognized French interests in the Balkans and knew the terrain, politics, and local personalities better than anyone else in the army.

In June 1918, Franchet was appointed commander of the allied Army of the Orient, deployed on the Salonika front. He reaped the benefits of the reforms and preparatory phase of tactics, logistics, instruction, and equipment organized by General Adolphe Guillaumat (1863–1940) for an offensive in September. Moreover, Guillaumat left him an Allied army with inter-allied cooperation on much firmer footing than in December 1917, when General Maurice Sarrail (1856–1929) was removed. While Guillaumat worked closely with the British element of the coalition and enjoyed the confidence of  its commander General George Milne (1866–1948), Franchet established stronger ties with the Serbians. Unlike his predecessor, he decided to launch the main attack from the ridges held by the Bulgarians and not in the valleys or on the enemy’s flanks.

After the Franco-Serbian attack at Dobro Pole broke the enemy lines (15–18 September) and the Greco-British operations near Dojran Lake (18–19 September), the Bulgarian front collapsed. Franchet’s troops exploited the breakthrough and took 90,000 prisoners and tons of war material. Within a few days, Bulgaria asked for an armistice, which was signed in Salonica on 29 September 1918, ending Bulgaria's participation in the First World War.

On 5 October, Franchet sent his plans to Prime Minister Georges Clemenceau (1841–1929). He suggested pursuing an offensive towards the Danube and then Austria-Hungary through Serbia, covering the left flank from the Austrians and the right flank from the German troops who could come from Ukraine. He even planned to constitute an army group to march on the Straits.

These plans were short-lived. Logistical constraints (communication and supply lines) made the operation difficult and both British and French governments wanted to withdraw troops from the Macedonian front to the benefits of the Western Front (in the French case) and Mesopotamia (in the British case). At the Superior War Council’s session from 6-9 October, Franchet’s attitude was highly reviled by Prime Minister David Lloyd George (1863–1945) and the Italians, who criticized French control of the operations. Clemenceau had to accept giving a free hand to his allies (the Italians in Albania, the British against the Ottoman Empire), while the French would operate in the Danube, foreshadowing future spheres of influence. This decision also initiated the decrease of importance of the allied Army Command of the Orient and thus Franchet’s decline in power.

Following this decision, on 13 October, General Henri Berthelot (1861–1931), former head of the French military mission in Romania, transmitted to Franchet new instructions, ordering him firmly to focus on the liberation of Serbia, the occupation of Bulgaria, and the constitution of a defensive line on the Danube. Meanwhile Berthelot entered Romania to reorganize the Romanian army and reestablish communications with General Mikhail Alekseyev’s (1857–1918) army in southern Russia, a step that made French forces co-belligerents in the Russian Civil War.

The Serbian and French forces under Franchet’s orders pursued a quick advance, Belgrade was freed on 1 November and on 3 November, Serbian troops occupied the Banat in Hungarian territory. At this point, Franchet again suggested launching an offensive toward Bohemia in cooperation with Italian troops to Clemenceau. In the meantime, the Hungarians, who did not recognize the armistice of Villa Giusti between Italy and Austria-Hungary, asked Franchet for their own armistice on 7 November. Mihaly Karolyi (1875–1955), leader of the Hungarian delegation, wanted to secure ambitious political clauses (coal delivering from Germany, Hungarian borders preserved and secured from Czechoslovak, German, Romanian, and Serbian offensives), which were all refused by Franchet, who imposed a path to round up August von Mackensen’s (1849–1945) army in Romania. Due to the slowness of Romanian remobilization and troop movements, this maneuver could not be achieved.

In line with the instructions of 13 October, Franchet was put in charge of southern Russia by Clemenceau and was ordered to intervene against the Bolsheviks in Crimea, an operation he disapproved of and judged too risky. On 17 December, his field commander General Henri Berthelot landed in Odessa, but the intervention failed and Franchet had to recall Berthelot on 1 April 1919. In the meantime, Paris named Franchet Allied High Commissioner for the occupation of Constantinople, but the British had no intention of giving up the upper hand on the imperial city. Franchet finally left the command of the allied Army of the Orient in March 1920.

Franchet was made marshal of France and voivode of the Kingdom of Serbs, Croats, and Slovenes in 1921. He became inspector general of the troops in northern Africa in 1923 but had to retire after a car accident in 1933. He dedicated his time to social activities for the Army of Africa through the Comité des Amitiés Africaines, which he founded in 1935. He was elected at the Académie Française to the seat of the Marshal Hubert Lyautey (1854–1934) in 1934. Franchet died in Saint-Amancet on 8 July 1942 and was buried in the Invalides.