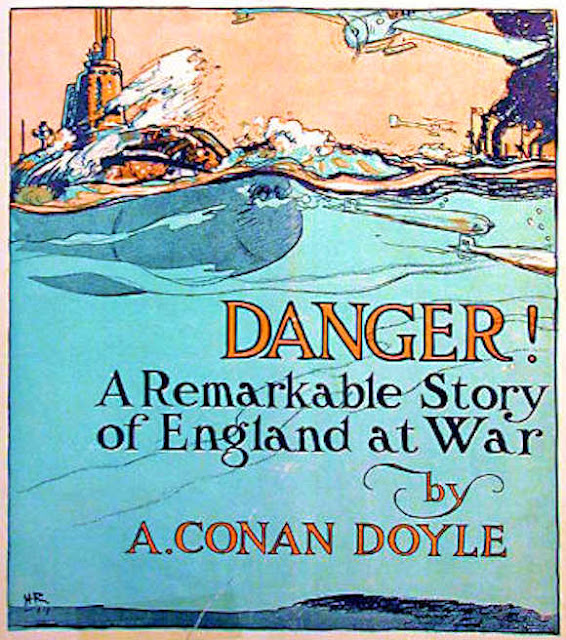 The most accurate prewar prognosticator of the threat presented to England by German U-boats was none other than Arthur Conan Doyle. After visiting Germany in 1911, Conan Doyle began to study German war literature. He saw that the submarine and the airplane were going to be important factors in the next war. He was particularly concerned about the threat of submarines blockading food shipments to Britain.

Convinced that this was a vital precaution, Conan Doyle eventually took his idea to the public in the form of a story, "Danger! Being the Log of Captain John Sirius" that originally appeared in the July 1914 edition of The Strand magazine and was republished in Collier's the following August.. The story dealt with a conflict between Britain and a fictional country called Norland. In the story, Norland is able to bring Britain to its knees by the use of a small submarine fleet. Its opening passage was an eye-opener:

It is an amazing thing that the English, who have the reputation of being a practical nation, never saw the danger to why they were exposed. For many years they had been spending nearly a hundred million a year upon their army and their fleet. . . Yet when the day of trial came, all this imposing force was of no use whatever, and might as well have not existed.

Doyle’s proposals, given voice an imagined Times leader in the story, included: reformation of agriculture and trade policies to provide “sufficient food to at least keep life in her [Britain’s] population;” construction of “two double-lined railways under the Channel” to facilitate movement of goods and, presumably, armies; and “the building of large fleets of merchant submarines for the carriage of food.” Clearly, Doyle’s major concern was with having enough food to feed the nation during hostile times.

Sadly, Conan Doyle's warnings were ignored, at least by the British. German officials were later quoted as saying that the idea of the submarine blockade came to them after hearing Conan Doyle's warnings against such an event. How much of that statement was truth and how much was propaganda designed to cause conflict within Britain is not known.

From: Continuum, Newsletter of the University of Minnesota Libraries