Recommended: Mark Steyn on George M. Cohan's "Over There"

If you're a fan of Mark Steyn's commentary on current events like I am, you probably know that he also has a musical side both as a critic and  occasional performer.  Here is his 2017 article on America's best-known contribution to World War I's musical catalog, "Over There."

President Trump was a guest of President Macron this past week to mark not only Bastille Day but also the one hundredth anniversary of America's entry into the Great War. So, with that in mind, altogether now:

That the Yanks are coming!

The Yanks are coming! 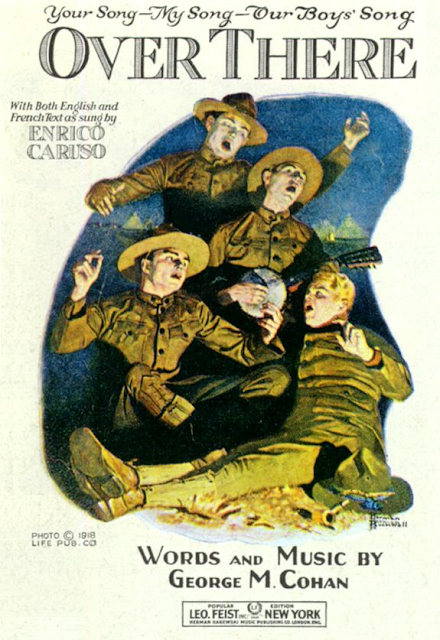 In fact, President Wilson sent the word that the Yanks are coming on April 6th 1917, and this song was written that same day. But if President Trump can mark the centenary of America's declaration of war three months later, then we can do the same for the centenary of the biggest American hit song of that war. In pop-music terms, the Great War was the war to end all wars: It was a bonanza for Tin Pan Alley on a scale never seen before or since. The Second World War would produce ballads of love and separation—"I'll Be Seeing You," "I'll Never Smile Again," "We'll Meet Again"—but the first generated war songs about war, about soldiering in foreign climes: "Pack Up Your Troubles In Your Old Kit-Bag," "Good-Bye Broadway, Hello France," "I Don't Know Where I'm Going But I'm On My Way," "Hello Central, Give Me No Man's Land," "I'm Crazy Over Every Girl In France," " Mademoiselle From Armentières (Parlay-Voo)," "My Belgian Rose," "If He Can Fight Like He Can Love, Goodnight Germany," "Sister Susie's Sewing Shirts For Soldiers" (and my old pal Irving Caesar's extension thereof, "Brother Benny's Baking Buns For Belgians")... Most of them vanished with the Armistice, but this one was on an entirely different scale and echoes down the decades:

And we won't come back till it's over

The Great War began in August 1914—for almost everyone else, that is. Any visiting space alien alighting on North America in those first three years would have concluded that Canada was the bellicose, militaristic power of the western hemisphere—recruiting posters everywhere, soldiers shipping east on every railroad platform. South of that border, President Wilson campaigned for election in 1916 under the slogan "He Kept Us Out of the War," and that was how a distant republic liked it. Isolationism was widespread, including in Tin Pan Alley, where the biggest American war song to date had been  "I Didn't Raise My Boy to Be a Soldier".

But a canny songwriter can turn on a dime, or a crotchet, and no one turned more nimbly than George M Cohan, the soi-disant "man who owns Broadway." If you're in Times Square on New Year's Eve, that's his statue the revelers are thronging round. He deserves his place. At the dawn of American show business, he could do it all—actor, singer, dancer, producer, director, author, play doctor, and composer and lyricist of such lasting hits as "Give My Regards To Broadway," "I'm A Yankee Doodle Dandy," and our Song of the Week #12, "You're A Grand Old Flag."