The effect of the war upon the United States will depend upon what American citizens say and do. Every man who really loves America will act and speak in the true spirit of neutrality, which is the spirit of impartiality and fairness and friendliness to all concerned. . .[D]ivisions amongst us would be fatal to our peace of mind and might seriously stand in the way of the proper performance of our duty as the one great nation at peace, the one people holding itself ready to play a part of impartial mediation and speak the counsels of peace and accommodation, not as a partisan, but as a friend. . .The United States must be neutral in fact, as well as in name, during these days that are to try men's souls. We must be impartial in thought, as well as action, must put a curb upon our sentiments, as well as upon every transaction that might be construed as a preference of one party to the struggle before another. 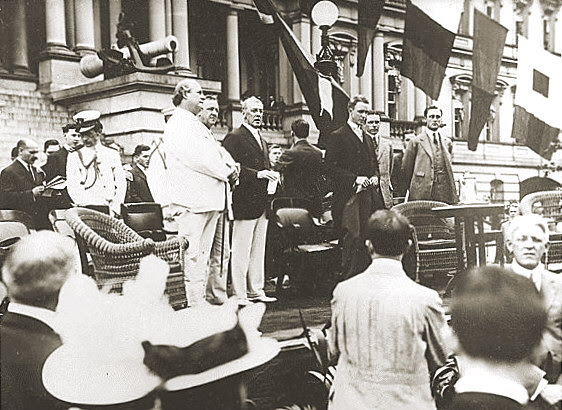 This was the official position, and some people, like Secretary of State William Jennings Bryan felt that was to be the nation's posture, throughout the hostilities. Historian Thomas Fleming, however, in his 2004 work Illusion of Victory scathingly described what happened next.

American neutrality, in short, was a sham. . .Wilson talked—and talked and talked—about neutrality and apparently convinced himself that he was neutral. But the United States he was supposedly running was not neutral, in thought, word or deed, thanks to Wellington House in London—and the international banking firm of J.P. Morgan in New York. . .Morgan and his fellow bankers were the key players in the shift from genuine to sham neutrality.

[After a request for a loan request from the French government early in the war, the U.S. government issued this statement: ] "Loans by American bankers to any foreign government which is at war are inconsistent with the true spirit of neutrality. [However] as British and French orders for ammunition and other war material filled the books of U.S. companies, the pressure for financial assistance to pay for them grew more and more acute. Soon Robert Lansing [a Counselor at the State Department and soon to replace Bryan as Secretary of State] convinced Wilson that loans might be a violation of America's neutral stance—but the granting of "credits" to England and France by the House of Morgan and other banks was legally justifiable. . .Twenty years later in a Senate hearing, J.P. Morgan was asked about the difference between loans and credits. His testimony made it clear that practically speaking, there was no difference. . .By 1916, the Untied States was supplying Great Britain, France, and Russia with 40 percent of their war materiel.

Is there an explanation for Woodrow Wilson's "unneutral" neutrality? One answer is the president's Anglophilia. He profoundly admired the English system of government; in fact he thought it was superior to the American system. . .Another large factor was Wilson's peculiar blind spot about economic realities and their influence on people and affairs. [Also] not to be underestimated in Wilson's worldview was the influence of adviser Colonel Edward House [an extreme Anglophile.]

By permission of Mr. Fleming; photo from the FDR Presidential Library.