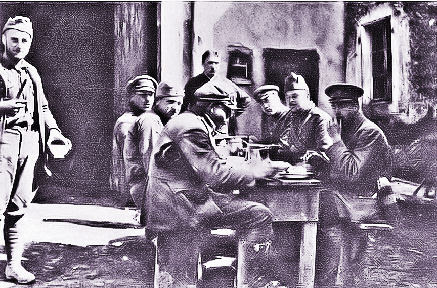 Section Two's John Fisher, who's been trying for more than a month to get to Paris to see his family, is at last granted "permission." His famous wife, the writer Dorothy Canfield, and their two children, Sally and Jimmy, after a long trip from their Vermont farm, reached Paris in early August. John has been separated from them for more than six months.


Dorothy knows that John has been homesick for his family for some time, and when he admits it in a letter to her in June, it made me feel as though I ought to start by the next steamer. In fact, she's not so sure [she] can hold out much longer without John. As soon as she puts her affairs her order, she and the children set off for France. In Paris, they move in with a friend, Celine, who lives at the Villa Montmorency, in the suburb of Passy. A high iron fence, thick with ivy, encloses the villa. There's an iron gate, as well, which locks with a great big key, Dorothy writes her family in Vermont, like a key to a prison. Three concierges guard the place. And Celine, like a true, suspicious city-dweller, goes around every evening, shutting all the iron shutters, locking every door that has a key. Dorothy feels secure in her new home. She and the children live upstairs in a large room. Sally sleeps in the big bed with her while Jimmy has the couch all to himself. There's also a bathroom, an unheard of luxury, beams Dorothy.

It's 12 September, when John, eager to see his family, boards the train from Rampont, a few kilometers southwest of Verdun, for the long, tedious ride to Paris. The train is due at the Gare de l'Est at seven in the evening. Dorothy and the children wait for him there, as anxious as he for the family reunion. Sally teases Jimmy, saying he won't recognize their father. Jimmy says he will too. At seven the train fails to show. The hours creep on, and still no train. Now Dorothy's not so sure she has the right date. Because John's section has just moved to Rampont, perhaps at the last moment he isn't able to get away. She waits for more than four hours and still no train. Finally, at eleven she takes the children home and puts them to bed. She climbs in next to Sally and tries to stay awake in case John does arrive and she can hear him at the gate. Another hour slips by, and she falls asleep. 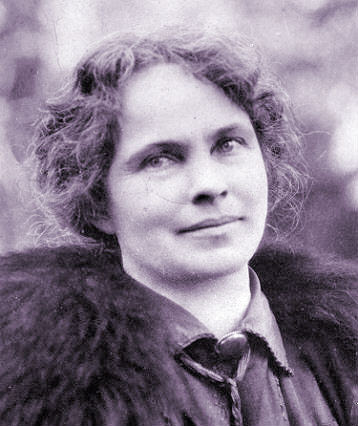 At one-thirty, the train creaks into the Gare de l'Est. Carrying his duffel bag over his shoulder, John wearily steps onto the platform. His first thought is to find a hotel, stay the night, and then find his way to the villa in the morning. But his furlough is too short and he wants to spend every second of it with his family. He hails a taxi and the driver, he writes, Dumped me down at a gateway with Villa Montmorency over it." John knows the apartment, he thinks. After locating it in the dark, he's not sure if it's the right one. He tries the gate. It's locked. He rings the bell. But he's unable to wake anyone. He rings it again, this time waking a dog. Like a burglar he scales the high iron fence and drops down into a garden. Looking up at the second floor, he spots an open window. He reasons that because "French people don't like night air" it must be Dorothy's. He whistles. 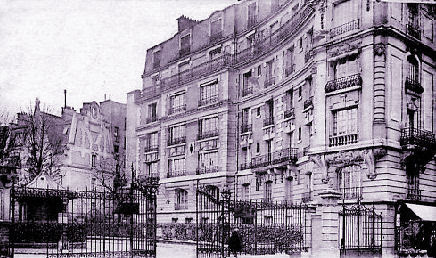 Inside the bedroom, Dorothy opens her eyes at the sound of the whistle. She hurries to the open window. In the starlight she makes out a man in uniform. "John?" she says in a low tone. "Dolly, it's me!"


Dorothy lights a gas lamp and lets John in. They kiss and hug and for a long time look each other over. He looks older to her, "very brown and hard and weather beaten and bald!" He's also shaved off his trademark beard. "His meditative, mild look of thoughtfulness, which is his characteristic expression, has apparently all gone with his beard." After a cold dinner she takes him upstairs to bed. When Sally sees her father she breaks into tears of joy. Jimmy sits up in bed. "Is he here?" he asks, rubbing his eyes. And, triumphantly to Sally, he says, "I did know fadder, don't you see?" And then he falls back, sound asleep.

"Jimmy" mentioned in this account would grow up to be Dr. James Fisher and during World War II would join the U.S. Army. He volunteered to serve in the "Great Raid" at Cabanatuan to rescue American prisoners of war in January 1945. Tragically, he died during the mission. 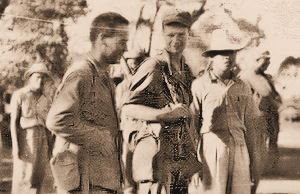 Capt. Fisher (Center) Hours Before His Death in the Philippines