An American Couple Goes to War, Part I
by World War I Author Stephen Harris 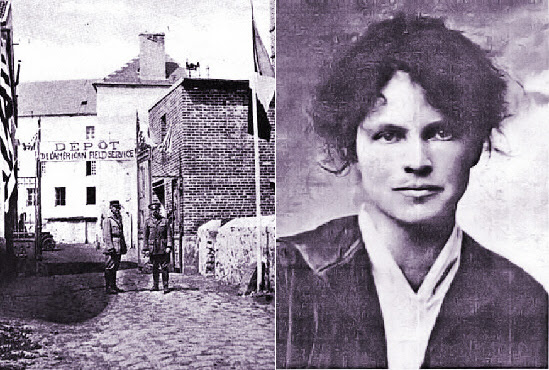 Captain Fisher (On the Right) and Dorothy Canfield

Captain of the Columbia University football team, John Redwood Fisher, like many of the other Ivy Leaguers, had spent much of his youth in France and felt it was his duty to help that country in any way possible. Driving an ambulance seemed the best way, and so in early 1916 he left his wife, the well-known author Dorothy Canfield Fisher, and two very young children at their hill farm in Vermont and headed for Verdun. Dorothy was unable to stand the separation. She quickly followed John to France, taking their children with her. While John dodged enemy artillery fire carrying wounded down off the heights of the Meuse River, she moved within four miles of the front and began to work with French soldiers blinded in battle. In a letter to her, John recounted an arduous rainy-night drive without lights, on a road that reminded him of the back roads of Vermont. He ran off the road once and had to be lifted back on to it by French soldiers:

So we drove on in the rain, creeping ahead at low speed. We started passing a long line of soldiers coming back from the trenches, very spooky they were in the black; but a minute later when my right rear wheel dropped into a shell hole I was glad there were plenty of soldiers at hand." Again he was set on the road. "I can't possibly describe the agony of attention, till shoulders and back ached and the eyes saw the road tilted up as a cloud above a deep valley. About ten miles from the Central Poste it began to rain torrents and we could see nothing, nothing. It took real resolution to push on. I've seldom been so relieved over anything as when we made out dimly the houses of the village. From there on to the sorting hospital we could see lights and my own flickering gas burner seemed fairly black. We had done twenty miles in three hours! 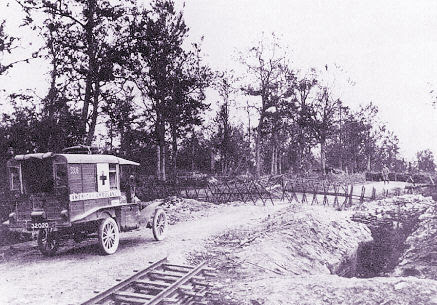 "The blind are awful pitiful to see."

In the weeks that Dorothy waits for John to come to her, she volunteers to work for the Franco-American Committee for Men Blinded in Battle. Winifred Holt, who is devoting her entire life to helping the blind, runs the committee. Before the war, Miss Holt had founded the New York Association for the Blind. When Dorothy meets her Holt has already set up headquarters in an old hotel at 14 rue Daru, which she's named "The Guardian of the Lighthouse." It's a forty-four-room hotel. Miss Holt describes the place as radiantly clean, but scantily furnished. Kitchen tables, stained a respectable brown by our friends, and funny upright chairs with reed bottoms were our principal furniture. For Miss Holt, Dorothy edits The Lighthouse, a magazine for the soldiers, and also works on compiling a library for them — all set in Braille.

The more intelligent [soldiers] who have been officers, etc., need a re-education to fit them for business positions as typewriters etc," she writes to her family "That's where my work is coming in this winter in preparation of a library for them in their own raised-text. They have nothing now to speak of and they need everything—arithmetics for those want to be accountants or to run their own small businesses, grammar, for those want to be typewriters and stenographers, etc, and treatises on massage (that's a very suitable way of earning a living for a strong blind man), on cabinet making, basketry, weaving, etc., etc. ad lib. And then after that as fast as possible, books for instruction and entertainment and such. Histories, geographies, novels, stories. These men suddenly blinded in battle are all men who read before and who need books almost as they need food. 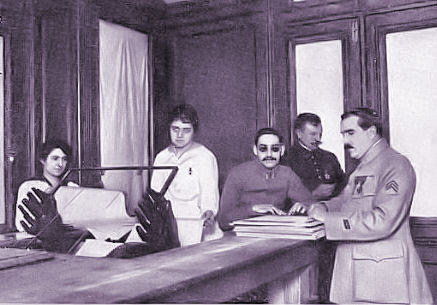 Blind Soldiers Proofreading an Issue of The Lighthouse

To get all this done, Dorothy turns to Paris professors for assistance. Her biggest worry is the ability to abridge works of great literature because, she believes, "those can't be compressed without spoiling them." Meanwhile, she finishes editing her first number of The Lighthouse. She's written two articles, a short story and a poem, in French—"Two Enemies to Conquer." The first enemy is Germany. The second is blindness. How absurd, she writes, But something was needed which would sound the note of courage and cheer, in verse, because the blind commit to memory more easily that way." Her short story, which she calls preposterous, is a "nice sentimental little story about a man blinded in battle who found in his nurse in the hospital his old sweetheart from whom he had been separated, etc., etc.


Dorothy often invites a few of the soldiers to her apartment at the Villa Montmorency for some music, chocolate, and little cakes. Sally can't wait to entertain the first group that's accepted her mother's invitation. At the last minute, Dorothy decides that her daughter might be too upset if she sees the wounded soldiers. She sends her to the park instead. And afterward she is glad she'd taken such a precaution. In fact, it's almost too much for Dorothy. The blind are awfully pitiful to see, even when they have no other wounds and most of them have, of course, head wounds that you see. Our four were not especially bad to look at except one, who had had a grenade explode full in his face! He didn't have much face left, poor fellow! He was the nicest one of the lot, too, a married man with a wife and a little girl about Jimmy's age. We did our best to give them a happy afternoon.

Dorothy's work gives her much satisfaction, especially because John's doing his part as well as, transporting the wounded — many of them blind — off the Verdun battlefield. You see I'm really doing something here. And the sorrow I feel to see such men as I do among the blind seems somehow less embittering when I know I am trying to bring some light to them. Then, too, they are less dreadful to see than to imagine because one's imagination doesn't trust enough in the divinity of the patience and courage which lies in human hearts!

Part II of this article will appear Sunday 18 August 2013