Below is a monument located south of Belfort, France, in the Vosges Mountains. It celebrates Jules André Peugeot, corporal of the 44th Regiment of Infantry. On 2 August 1914, some thirty hours before the declaration of war between Germany and France, Peugeot and four soldiers with him gave letters home to the local mail carrier, who took them and went off. There was a house then where now there is the monument. 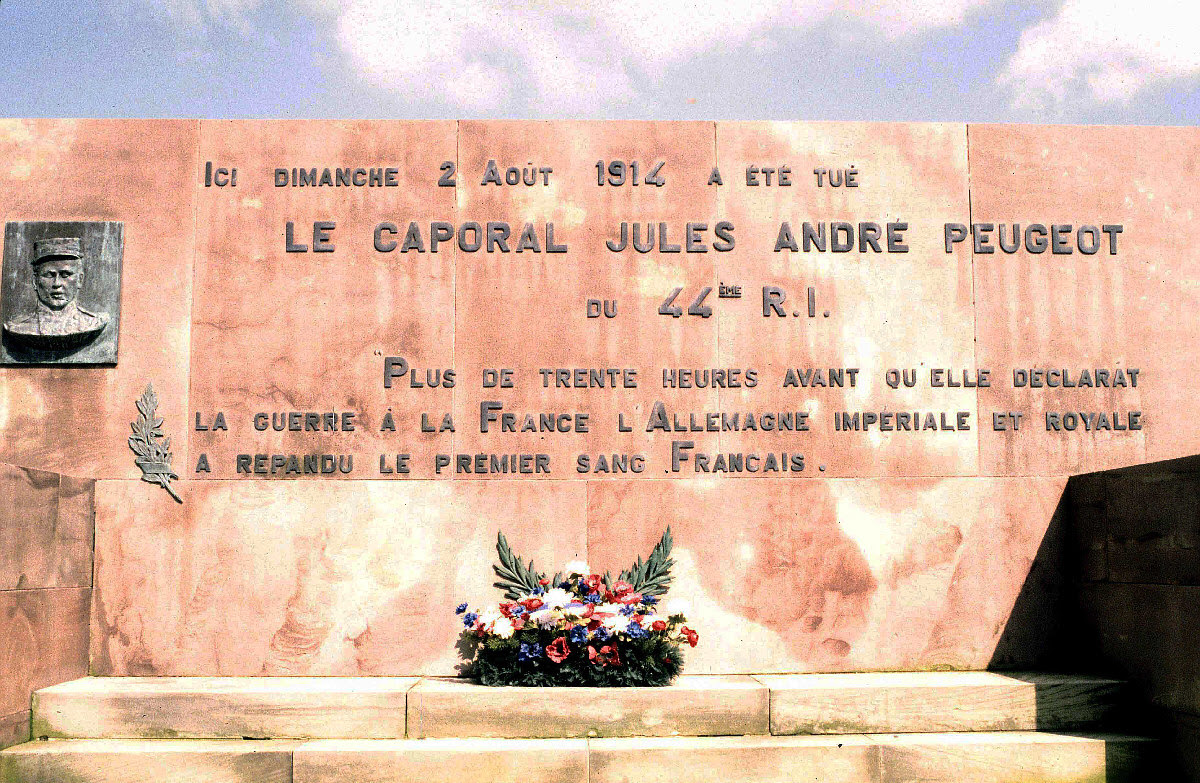 The daughter of the house went across this road to the spring from which the family and the soldiers got their water. At the edge of a field she saw horsemen. They wore spiked helmets. The girl ran, screaming, “The Prussians!” Corporal Peugeot came out of the house carrying a rifle. He stood on the slight rise where his monument is now and saw, coming toward him at a gallop, a German officer on a horse. He raised his rifle and shouted, “Stop there!” The German, who was Lieutenant Camille [actually Albert] Mayer, held a revolver. On it was written in Latin, “For the War.” He fired three times past his horse’s head. Peugeot fired back. Mayer swayed in the saddle. His horse passed the house and kept going. Peugeot turned and reeled. Four shots. It had been a very hot summer, and the roads and fields of this wet region would have been drier than usual. So when Peugeot fell across the threshold of the house, and Mayer slid out of his saddle, each would have found dust rather than mud. The site of their encounter was never to be important again.


The house billeting Peugeot and four other soldiers at Joncherey is gone. Now a monument bearing his likeness and identifying him as the first Frenchman to perish in the conflict marks the spot where he fell. An earlier monument, dedicated by President Poincaré on 16 July 1922, was destroyed by the Germans on 24 July 1940. The present marker was erected in 1959.

Location: Germany was only 10 kilometers to the east, Alsace and Lorraine having been annexed after the Franco-Prussian War. 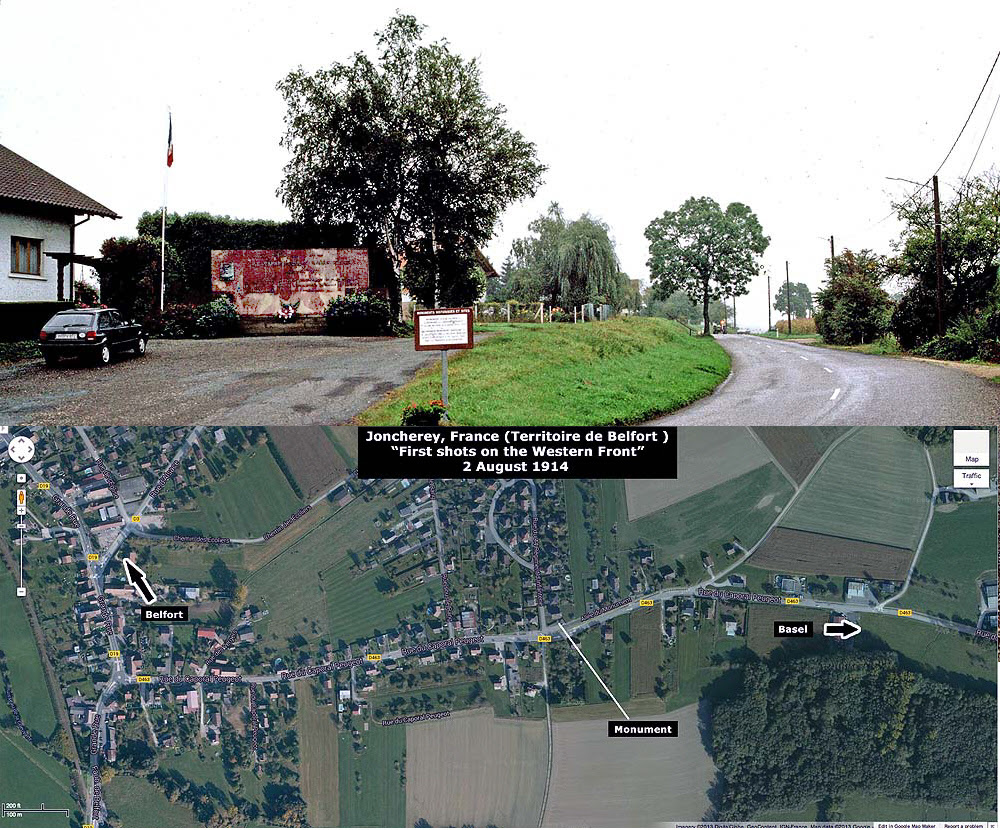 The photos below show the burial sites of the first two fatalities on the Western Front.

Corporal Peugot is buried in a family plot at Etupes, France, south of the
site of the 2 August incident. 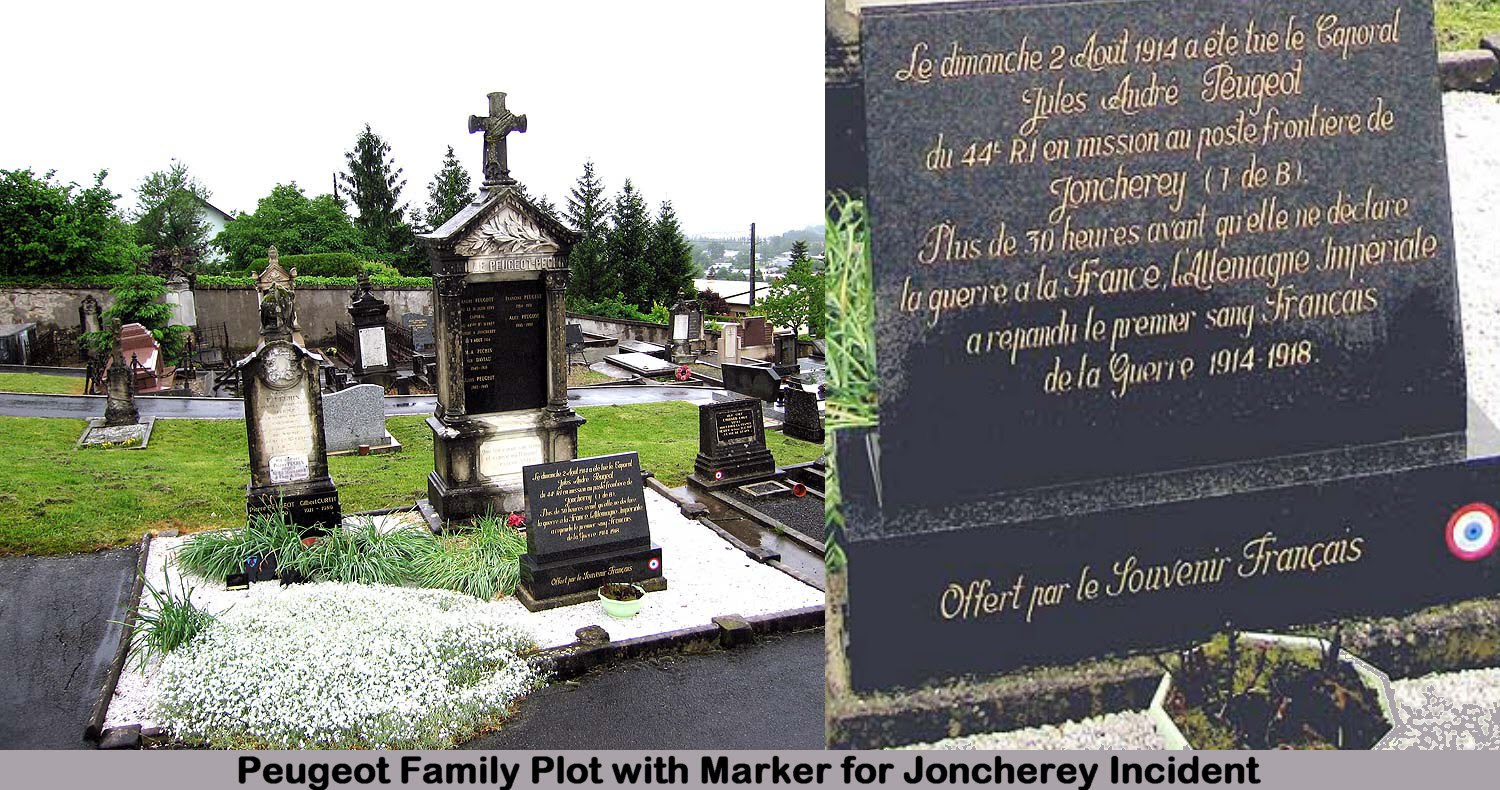 Lieutenant Mayer lies in the German Military Cemetery at Illfurth, France, a village along Route D432, which connects Altkirch (29 kilometers due east of Belfort) and Mulhouse, which is about 10 kilometers north-northeast.