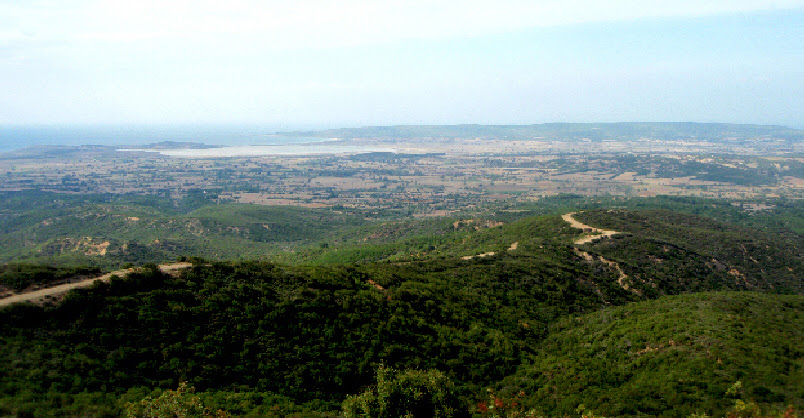 Suvla Bay in Distance Viewed from Chunuk Bair
The concept was for the troops landing at Suvla to immediately advance toward Chunuk Bair and the Low Hills to the right.

By June 1915 everyone knew the land assaults at Gallipoli had failed. There were stalemates at both the Cape Helles and Anzac sectors, and they were too distant (19 miles) to mutually support one another. A breakout plan had been advanced earlier based on expanding the Anzac sector by landing additional divisions just to the north at the beaches around Suvla Bay.

Suvla, however, had some disadvantageous physical features (see photo above). Just behind the beaches is a huge salt lake that prevented the new units from deploying shoulder to shoulder initially. Five to eight kilometers inland, a horseshoe of low hills isolate the area. The assault force needed to land north and south of the lake, get organized, and immediately seize the ring of hills as a launch pad to attack the higher and ultimate objective, Chunuk Bair. There was also to be a concurrent attack out of the Anzac sector against Chunuk Bair, as well as assaults on the south end of Anzac to tie down Turkish forces, and a diversionary operation out of the now almost irrelevant Helles sector. Once atop Chunuk Bair the unified Allied force was then expected to march overland to the straits, seize the forts, and finally allow the passage of the battleships. The operation seemed conceptually sound, intelligence about the enemy was much more accurate than on the original day of landing, 25 April, and manpower was sufficient. It seemed to be a winning plan. 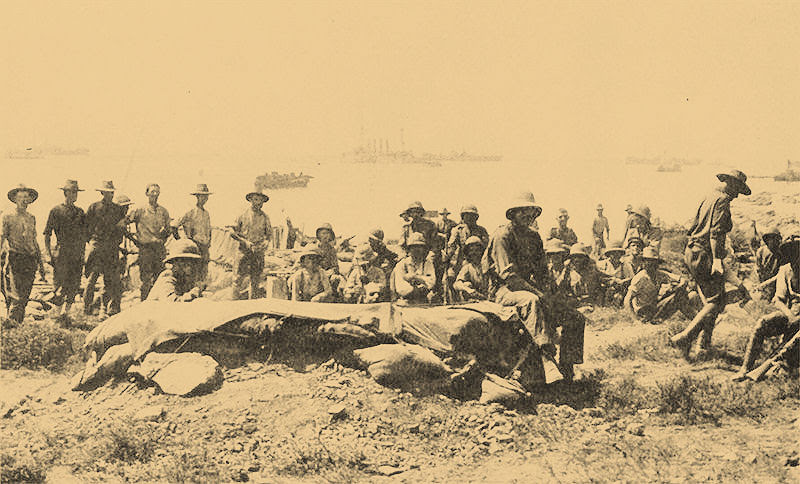 British Troops Wasting Time at Suvla Bay
The idea was to capture the nearby undefended heights before the Turkish Army could send reinforcements.

The plan, whatever its merits, was doomed, however, because the key Allied commander, Lieutenant General Sir Frederick Stopford, proved utterly incompetent, and because the Turkish sector commander, Mustafa Kemal, proved utterly masterful on the battlefield. That story is told in all the major works on the campaign.

Images from the Fighting
A diorama at the Australian War Museum depicts the multi-level assault on the Turkish defenders at Lone Pine.  Tired New Zealanders  resting before their final, and temporarily successful, assault on Chunuk Bair.

Some of the Great War's most memorable traditions and legends, heroic and tragic, come from Suvla Bay part of the Gallipoli campaign: the first action and victory of the Kitchener New Armies at Lala Baba  (by the new 11th Division); the valiant Australian efforts at Lone Pine and the Nek; the New Zealanders capture of Chunuk Bair and sacrifices at Hill 60; and the King's own Sandringhams "vanishing" on the battlefield. By the end of August, it was clear the Suvla operation had failed. The area was evacuated just before Christmas as part of the overall withdrawal from Gallipoli.

Interestingly, Suvla was a focus of intense study in the interwar period by both the U.S. Marine Corps, which was developing its amphibious warfare capability, and by an up-and-coming U.S. Army officer in Hawaii, named George Patton, who, as you might expect, was very critical of the Allied commanders.