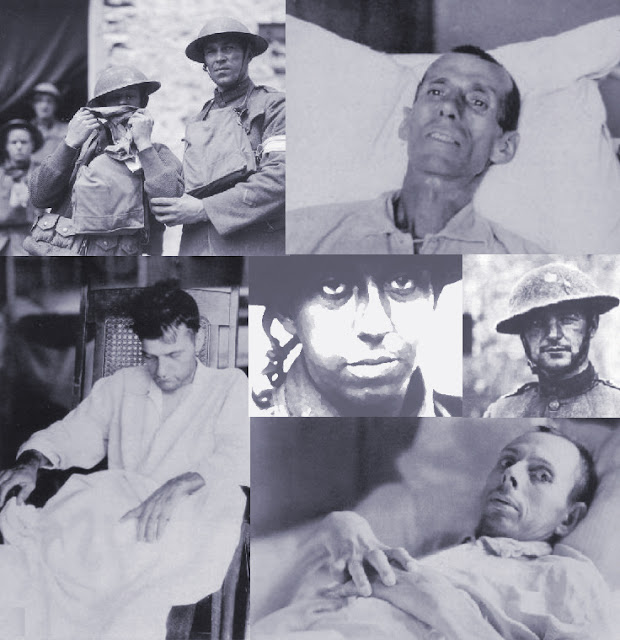 I ran into this poem for the first time when I was researching the encounter of Wilfred Owen and Siegfried Sassoon at the Craiglockhart Military Hospital, near Edinburgh.  Get ready for some disturbing imagery.

Who are these? Why sit they here in twilight?
Wherefore rock they, purgatorial shadows,
Drooping tongues from jaws that slob their relish,
Baring teeth that leer like skulls' tongues wicked?
Stroke on stroke of pain, — but what slow panic,
Gouged these chasms round their fretted sockets?
Ever from their hair and through their hand palms
Misery swelters. Surely we have perished
Sleeping, and walk hell; but who these hellish?

— These are men whose minds the Dead have ravished.
Memory fingers in their hair of murders,
Multitudinous murders they once witnessed.
Wading sloughs of flesh these helpless wander,
Treading blood from lungs that had loved laughter.
Always they must see these things and hear them,
Batter of guns and shatter of flying muscles,
Carnage incomparable and human squander
Rucked too thick for these men's extrication.

Therefore still their eyeballs shrink tormented
Back into their brains, because on their sense
Sunlight seems a bloodsmear; night comes blood-black;
Dawn breaks open like a wound that bleeds afresh
— Thus their heads wear this hilarious, hideous,
Awful falseness of set-smiling corpses.
— Thus their hands are plucking at each other;
Picking at the rope-knouts of their scourging;
Snatching after us who smote them, brother,
Pawing us who dealt them war and madness.