Curse of the Narrows The Halifax Disaster of 1917
Reviewed by James M. Gallen

Curse of the Narrows: The Halifax Disaster of 1917 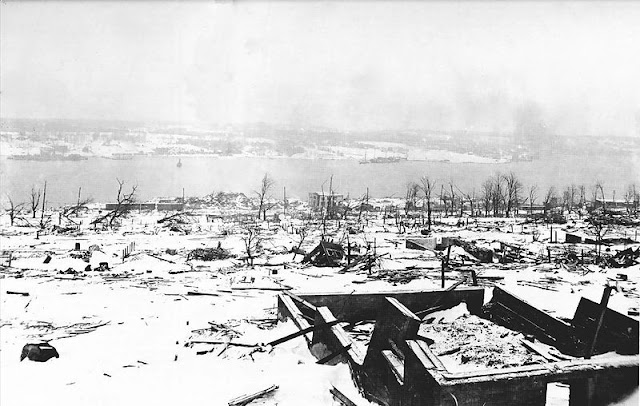 The trenches, barbed wire and no-man's-land were Over There, but on 6 December 1917 the Great War reached Canada. Laura M. Mac Donald tells how that came about in Curse of the Narrows The Halifax Disaster of 1917. Halifax, Nova Scotia, is a major port on Canada's Atlantic Coast whose prosperity has ebbed and flowed with the tides of commerce and war. The withdrawal of the Royal Navy in 1906 brought an ebb, but the war and the return of the Royal Navy activity came surging back. Soldiers, sailors, and commercial freighters crowded the streets, businesses, and the harbor as men, foodstuffs, munitions, and manufactured goods passed through on their way to aid Britannia. By 1917 Halifax was at high tide. Business bustled on both the Halifax and Dartmouth sides of the harbor.

The French vessel Mont Blanc had been loaded with high explosives in Brooklyn. The ship's carpenters had been ordered to line every inch of the hold with wood and to use copper nails that would not spark when struck. Stevedores wearing canvas slippers loaded the cargo that, with a storm or shift, could have destroyed everything within reach. Mont Blanc with its volatile cargo was ordered to proceed to Halifax to join a North Atlantic convoy.

Mont Blanc spent the night of 5–6 December outside the submarine nets of Halifax Harbor. A late coal delivery had kept the Belgian relief ship Imo (which should have already left for New York) in harbor overnight. The morning of the 6th, the pilots arrived and Imo and Mont Blanc began moving toward their rendezvous with history. As Mont Blanc was approaching the harbor, Imo began to move toward its exit. They were about three-quarters of a mile apart when Pilot Francis Mackay aboard Mont Blanc noticed Imo proceeding at an unusually fast pace within the harbor. As they closed, a collision became inevitable. Although impact with the TNT hold was avoided, a gash in the no. 1 hold sent Mont Blanc drifting toward Pier 6 in Dartmouth, one of the most populated areas along the northern stretch of wharves.


As the pilot and crew endeavored to minimize damage, the citizens watched as black and white smoke rose from Mont Blanc. Recognizing that nothing could prevent the impending explosion, the captain gave the order to abandon ship. The crew's warnings went unheeded as they paddled to shore and assembled under spruce trees, except for one crewman who did not stop running. Flames gave way to a series of explosions until 9:04:34  a.m., when Mont Blanc erupted in the largest, man-made, non-nuclear explosion in history. The heat evaporated water in the harbor, the tsunami threw ships inland and it and the air blast flattened blocks of the city, observers were blinded by the fireball, the sound was heard hundreds of miles away and communications to the outside world were largely cut. The following day Halifax was hit with minus-20 degrees Fahrenheit and a blizzard with gale force winds.

After an interlude about explosions, the focus of Curse of the Narrows shifts to the resulting damage to property, injuries, and the immense relief efforts that followed. Over 2,000 were dead or missing, over 6,000 injured, 9,000 rendered homeless with 41 fully and 249 partially blinded. Temporary hospitals were set up, naval vessels brought supplies and provided medical services, and physicians were dispatched from Montreal and Ottawa. A relief train from Boston fought the weather to bring supplies and medical personnel. Boston's generosity to Halifax was repaid when Halifax sent physicians to aid Boston during the Spanish flu epidemic and continues to this day as the official Boston Christmas Tree on the Boston Common is a gift from the people of Halifax.

Author Laura M. MacDonald had the advantage of many recorded interviews and testimonies taken during investigations from which to draw the facts of the case and the human-interest stories related to the explosion. She followed individuals and families who lived through or died in the tragedy. Perhaps the most touching story and photo is that of 18-month-old Annie Liggins who was found under a stove the day after. Originally misidentified as Olive Henneberry she was later nicknamed "Ashpan Annie."

The story of the Halifax explosion is a tragic disaster that should be known by anyone interested in North American involvement in the Great War. Curse of the Narrows is an excellent source from which to learn about the explosion and the human lives that it unalterably changed.