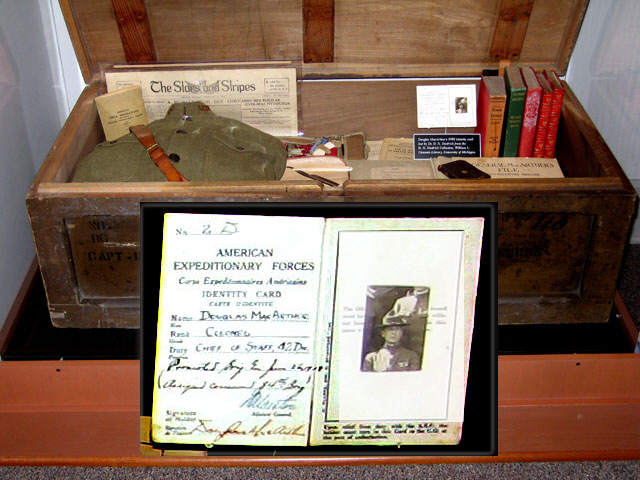 Regular contributor Steve Miller is a documentarian of World War One locales, including museums.  Here we have a revealing composite of photos Steve took at the General Douglas MacArthur Memorial in Norfolk, Virginia. It shows a blowup of the general's identity card with photo and the contents of his footlocker. The locker contains some interesting items: a uniform with Sam Browne belt; sewing kit; personal file of 83rd Brigade of the 42nd Division that MacArthur served in and commanded briefly; a razor set; a cigarette case presented to the general by his troops; identity card; Catholic and Jewish prayer books; first issue of Stars and Stripes newspaper; the pamphlets "Use of Mines in Trench Warfare," "Bayonet Training," and "Infantry Drill Regulations;" books: Minor Tactics, Richard Harding Davis's novel Captain Macklin's Memoirs, The Cavalry, and two volumes of Napoleon's writings.