From Entente Cordiale to Triple Entente 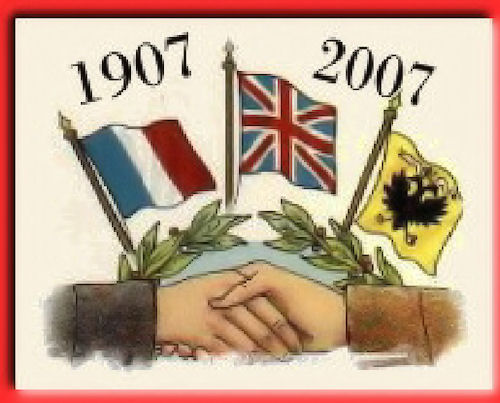 While diplomat/historian George Kennan dramatically labeled the French-Russian arrangements "The Fateful Alliance", it would be the British-Russian convention that set in place some subtle structural elements, the importance of which was not universally understood at the time. First, although relations among the three powers would always be prickly and sometimes icy, the Ententes provided a "talking circle" through which they discussed, evaluated, and responded to the prewar diplomatic confrontations with the Triple Alliance over crises from Bosnia to Morocco to the naval competition. Second, the three dual-understandings completed the dim outline of a new power arrangement, unthinkable in the 19th century when France and Russia were either enemies or competitors of the British Empire. Recall that Germany's Schlieffen Plan of 1905 was based on opposing a Russian-French coalition. Adding Great Britain and her empire's population, vast financial resources, and industrial potential to the list of enemy assets made that plan riskier to the point of in-feasibility. But this potentiality of a Triple Entente opposing the Central Powers did not become evident until very late in the July Crisis of 1914. The framework of the Triple Entente, however, was constructed in 1907 due primarily to a new Liberal British government.

A detente with Russia was of the highest priority for the Liberal government of Henry Campbell-Bannerman that took office in [Great Britain in] December 1905. On 13 December Foreign Minister Edward Grey assured Benckendorff, the Russian ambassador, that he was in favor of an agreement with Russia. Sir Arthur Nicolson arrived in St. Petersburg as the new British ambassador on 28 May, having "talked entente in and out, up and down" with Grey, Chancellor of the Exchequer Herbert Asquith, and Lord John Morley, secretary of state for India, before leaving London. Formal negotiations were launched on 7 June.

The speed with which Grey inaugurated negotiations with the Russians, at a time when Russia was still in a turmoil of revolution and the Russo-Japanese War a recent memory, bears witness to his own convictions in this direction as well as his desire to maintain continuity of foreign policy with his predecessors. The ground had been prepared by the Conservatives and tentative discussions had taken place in 1903, but although the Liberals were committed to uphold the Anglo-French entente, they were not committed to continue negotiations to extend it. However Grey had spoken in favor of an agreement with Russia as early as 1902, and in his City speech in October 1905 he declared that the "estrangement between us and Russia has. . . its roots not in the present but solely in the past."

Grey had pledged himself to improve relations with Germany as well as with Russia, but there seemed little possibility of this early in 1906 and Grey saw a need to check the growth of German power by both preserving and extending the French entente. When sanctioning the military conversations with France he argued that if Britain remained neutral in a future Franco-German war "the French will never forgive us...Russia would not think it worth while to make a friendly arrangement with us about Asia...we should be left without a friend and without the power of making a friend and Germany would take some pleasure...in exploiting the whole situation to her advantage." Hardinge added that "an agreement or alliance between France, Germany and Russia in the near future" would be a "certain" consequence. Thus re-establishing Russia as a factor in European politics on the side of France and England was crucial to Grey's aim of maintaining a balance of power in Europe. "An entente between Russia, France and ourselves would be absolutely secure. If it is necessary to check Germany it could then be done." Fear of Germany—German sea power, German encroachment in the Middle East; a possible Russo-German rapprochement—was evident throughout the negotiations.

Grey's attitude marked a change in emphasis from the Conservative policy of seeing Russia basically as a potential or actual menace to the Empire and especially India, to one of regarding her as a potential ally in Europe. "If Russia accepts, cordially and wholeheartedly, our intention to preserve the peaceable possession of our existing Asiatic possessions," declared Grey before taking office, "then I am quite sure that in this country no government will make it its business to thwart or obstruct Russia's policy in Europe. On the contrary it is urgently desirable that Russia's influence should be reestablished in the Councils of Europe."

The urgency came not only from the international situation but also from the realities which were revealed to the Liberals of Britain's military and naval position. These affected both her potential role of holder of the balance of power in Europe against Germany and more immediately her ability to defend her Empire against possible Russian aggression. It was brought home to the government that Britain was no longer able to meet all her commitments. By January 1907 the General Staff and the Admiralty had agreed that it was no longer possible to hold the Straits alone against Russia. Grey urged the necessity of keeping this information strictly secret. The Anglo-Japanese alliance had been welcomed by the navy as a means of reducing the Far Eastern fleet, and the Russo-Japanese War had reduced the Russian fleet, but the growth of the German Navy was putting such strain on naval resources as to increase reluctance to risk a military conflict with Russia in Asia. This was bound to have political repercussions. 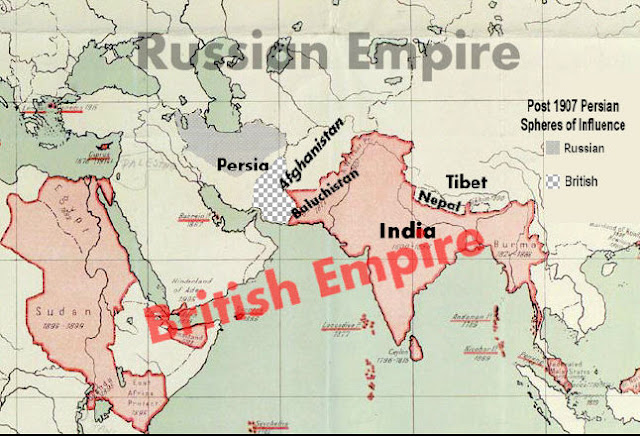 The Anglo-Russian Convention was signed on 31 August 1907 in St. Petersburg. The convention solidified the boundaries that identified respective control in Persia, Afghanistan, and Tibet. It delineated spheres of influence in Persia, stipulated that neither country would interfere in Tibet's internal affairs, and recognized Britain's influence over Afghanistan. The framework of the future Triple Entente had been erected.

Source:  Beryl Williams in the November 2007 issue of OVER THE TOP.