George Michael Cohan (1878–1942) began his career as a child, performing with his parents and sister in a vaudeville act known as "The Four Cohans." Beginning with Little Johnny Jones in 1904, he wrote, composed, produced, and appeared in more than three dozen Broadway musicals. Cohan published more than 300 songs during his lifetime, including American standards "Give My Regards to Broadway," "Yankee Doodle Dandy," and "You're a Grand Old Flag." He displayed remarkable theatrical longevity, appearing in films until the 1930s, and continuing to perform as a headline artist until 1940.

Known in the decade before World War I as "the man who owned Broadway," Cohan is considered the father of American musical comedy. His life and music were depicted in the Academy Award-winning film Yankee Doodle Dandy (1942) and the 1968 musical George M! A statue of Cohan in Times Square in New York City commemorates his contributions to American musical theater.

Shortly after America entered the Great War, while riding on a train, Cohan was inspired to write a patriotic song. He modeled it on a bugle call, inspiring Americans to cross the seas for service in a foreign land. "Over There" was an instant success, selling over two million copies by the end of the war. Perhaps the most popular version of "Over There" was sung by Nora Bayes, but Enrico Caruso and Billy Murray also sang beautiful renditions. 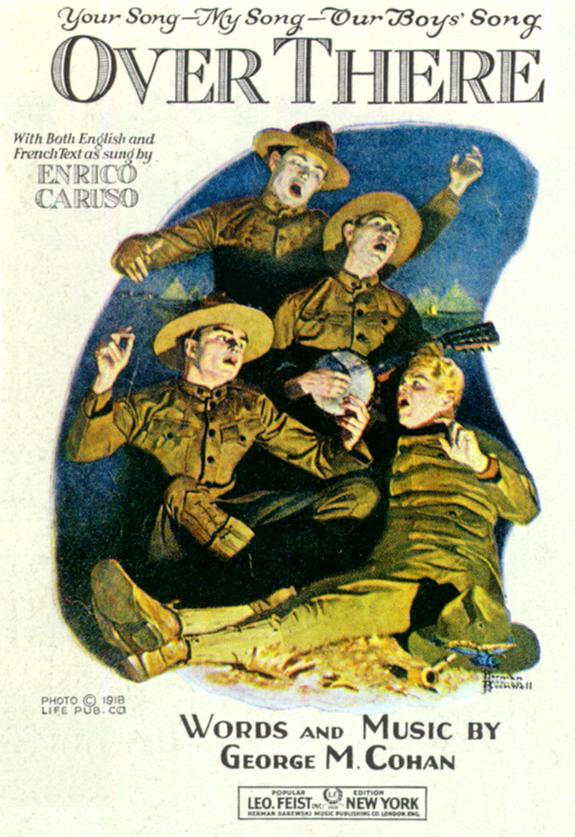 The dynamic Cohan and his partners presented over a dozen shows and plays on Broadway during 1917 and '18, without a heavy patriotic emphasis in most. At the time of the Armistice he produced a show with the troops from nearby Camp Merritt titled Good Luck, Sam! that ran for about a month. Nevertheless, he is forever connected to the American experience in the Great War. On 29 June 1936, President Franklin Roosevelt presented him the Congressional Gold Medal for the boost "Over There" and Cohan's other musical efforts gave to the nation's morale.