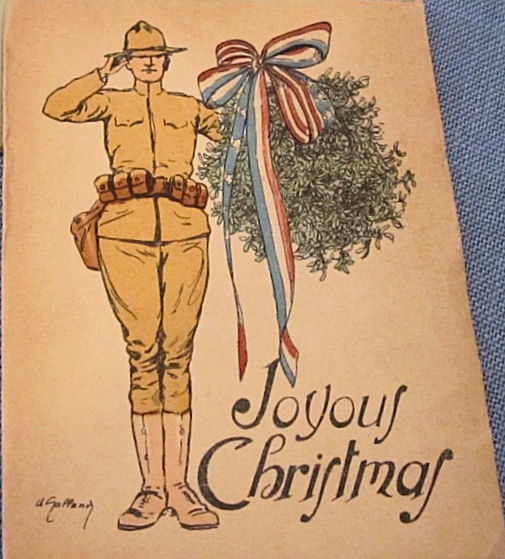 There was a White Christmas in parts of France and Germany 99 years ago as two Doughboys from the same family turned their thoughts to family and friends located far-off in the farmlands of North Dakota.

It was Christmas Day, 1918—some six weeks after the Armistice was signed—that Private Palmer Hanson of Company G., 138th Infantry, wrote to his brother, Adoph Hanson, in Mayville, North Dakota: “Will take time and drop you a few lines today as it is Christmas day and not(h)ing else to do, as we are not drilling today.” Private Hanson noted that rain on Christmas Eve had turned to snow by Christmas Day, but the snow was melting almost as soon as it hit the ground.

One day later, Private Carl Molden addressed a letter to his cousin, (Miss) Caroline Hanson of Mayville, in which he noted the troops “had a White Xmas here…about 2 inches of snow in the morning. But very cold.” He was off duty from his kitchen assignment the afternoon after Christmas.

Private Hanson was writing from Dagonville, located in the Meuse department of northeastern France. Private Molden, who was with the AEF’s 54th Pioneer Infantry, was stationed across the border at Sehlem in Germany’s Rheinland-Palantinate region. Private Molden was a cousin of Caroline Hanson and was either a cousin or a nephew of Private Hanson. Their letters were preserved in a family archive eventually housed at the State Historical Society of North Dakota in Bismarck.

Palmer Hanson was a guest in a French household as he wrote his Christmas Day letter home. “I and a couple other boys are at a French house writing now. They are very nice people, and it is nice and warm in here.”

Christmas was livelier where Private Molden was at. There was chicken for Christmas dinner followed by “lots of doings, dancers and Xmas fooling.” But he missed North Dakota: “Would liked I had been home myself for Xmas. Hope I will be back before spring. If I do I will come and visit you. Would like to see Palmer again to(o).”

Both soldiers received Christmas goodies. Private Hanson said he and an army buddy had acquired “two big bowls of milk each. The first time I drank milk for a long time, except can(ned) milk. But I am used to it now.”

“Yesterday we got chocolate candy and some other stuff, and today for dinner we got nuts, grapes and one-half pound of candy each. Spose (Suppose) you are going to have Xmas tree this year, too,” he commented in the letter addressed to his brother Adoph.

Private Molden’s Christmas presents “so far” consisted of “a package of cookies, bar of candy and a package of tobacco.”