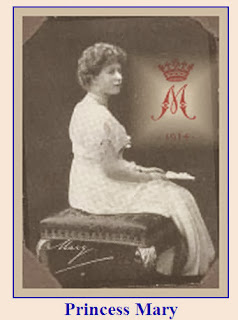 The first winter of the Great War saw two events that sustain one's hope in the potential for good even in times of dire conflict. One event was the spontaneous Christmas truce on the Western Front, primarily between British and German forces. The other was the spontaneous generosity of a 17-year-old girl, Princess Mary, only daughter of King George V and Queen Mary. Her intention was to provide a Christmas gift for every person serving in the King's uniform, both abroad and on the home front. Her wish was fulfilled to an astounding degree and created one of the most touching mementos of the war. Princess Mary's Christmas Gift Fund was announced on 15 October 1914. The Princess had wanted to underwrite it herself from her allowance, but it was decided by the inaugural committee, headed by the Duke of Devonshire, that a public subscription was the better source for funding. The response was enormously positive and generous. Ultimately £200,000 was raised by a nation eager to respond to the Princess's plea:

"I want you now to help me to send a Christmas present from the whole of the nation to every sailor afloat and every soldier at the front. I am sure that we should all be happier to feel that we had helped to send our little token of love and sympathy on Christmas morning, something that would be useful and of permanent value, and the making of which may be the means of providing employment in trades adversely affected by the war...Please will you help me?" 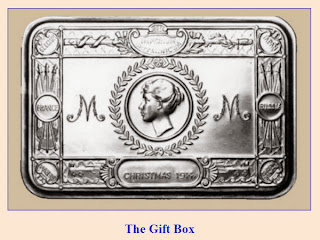 The gift itself was a brass box, a tin with a hinged lid that measures 5" x 3 3/8" x 1 1/8". The lid bears a left-profile portrait of the Princess, with her initial "M" on either side of the portrait. The seven Allies of the time are represented: embossed at the corners are Belgium, Japan, Montenegro, and Servia, and at the sides are France and Russia. "Imperium Britannicum" holds place of honor above Princess Mary's portrait, and "Christmas 1914" balances the center beneath her portrait. Within the box were several gifts that were distributed thus: 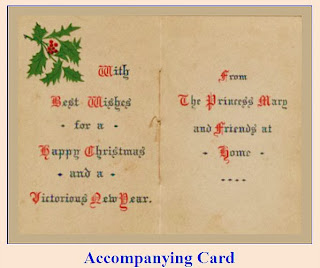 By Christmas of 1914, approximately 355,000 boxes had been distributed. Given the extensive fronts across the globe, it took well into 1916 to distribute all the boxes to those entitled to them; during that time war widows were included in the recipients. Ultimately, 2.5 million boxes were made, filled, and given out. Many were carefully sent home from the front as keepsakes.

Princess Mary continued her connection with the armed services throughout her life (1897–1965), becoming colonel-in-chief of the Royal Scots (1918) and of the Royal Signal Corps (1935) in addition to several Commonwealth corps and regiments. The legacy of the Princess Mary box is a genuine testament to her spirit of public service.