Doughboy Basics: What Are the Lasting Contributions of the Doughboy Generation to America? 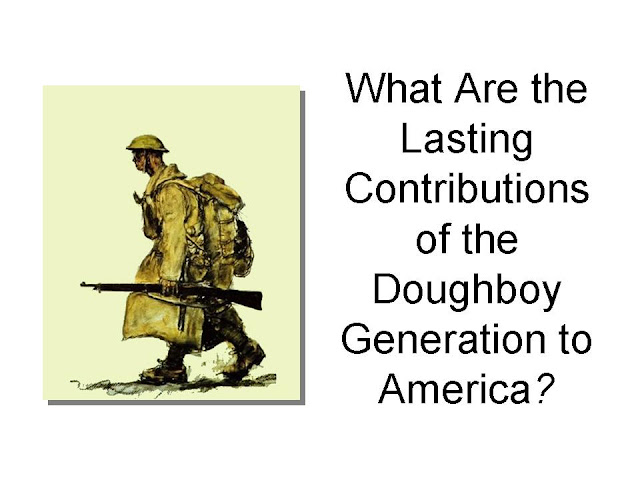 Maybe, in the broadest sense, the great contribution of the Doughboys is what all of America's warriors have given their nation over the centuries—their sacrifices made our America of today possible and successful and the generation of today a standard to live up to.

Some specifics of their experiences are also worth noting, though:

The AEF had a large component of recent immigrants who were assimilated into the mainstream of the nation almost instantly due to their service.

They gave us Armistice Day, which expanded to Veterans Day as the nation fought more wars.

The Doughboys were the principal champions of the WWII Veterans Bill of Rights legislation  that helped future service members (including your editor) gain a better education and first home.

The military experience in World War I prepared the nation to fight and win the Second World War and the Cold War that followed.

The Doughboys, even before the Armistice, decided they wanted to play an active role in postwar America. This played out later in the founding of the American Legion and the sad Veterans March on Washington in the 1930s. Professor Jennifer Keene, discussed this in her 2001 work, Doughboys, the Great War, and the Remaking of America:

Why is World War I important in American history? Quite simply, the Great War generation played a critical role in constructing the modern U.S. Army, turning World War II soldiers into the most privileged veteran generation in American history and determining what mass military service would mean for millions of American men throughout the twentieth century.