Was There Such a Thing in the World's Great War as the Lost Battalion?
Reviewed by Peter L. Belmonte

Was There Such a Thing in the World's Great War as the Lost Battalion? Memoir of Sgt Major Walter Baldwin, 308th Infantry.


The story of the Lost Battalion is well known to many students of World War I. There are several books that focus on the heroic stand of Major Charles Whittlesey's command in a dank ravine in the Argonne Forest almost a century ago. Firsthand recollections of the event, however, are rare. Walter J. Baldwin, who was a corporal in charge of the runners in Whittlesey's battalion headquarters, wrote his memoir in the 1930s. Now Baldwin's son, Thomas J. Baldwin, has transcribed his father's typescript and published it in this book. The book is arranged with Thomas's transcription placed opposite a facsimile of his father's original typescript, page-by-page. Thomas's chapter summary and his father's typewritten roster of men in the Lost Battalion precede the narrative. A few photographs, including one of Sgt. Baldwin in uniform and another depicting his medals, are appended after the narrative. 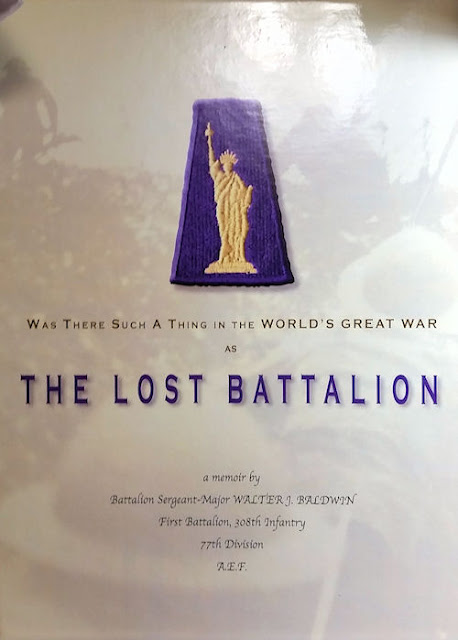 Walter Baldwin's memoir is a chronological presentation of his time in the army, from induction to discharge. He was drafted in the fall of 1918 and assigned to the 308th Infantry Regiment, 77th Division, and his memoir covers his time in training, shipment overseas, and combat in July and August 1918. The thrust of the memoir, however, is Baldwin's recollection of combat in the Argonne Forest. Baldwin entered the Argonne on the first day of the offensive, 26 September. By 2 October, Whittlesey's command (actually parts of two battalions and men from some other miscellaneous units) had become separated from the rest of the regiment and surrounded in a ravine, called "the pocket." In the ensuing five days, the men in the pocket endured a terrible ordeal.

Baldwin recalled the horror of sudden death, in this case by improperly ranged American artillery:

We were moving slowly to our new rendezvous, with Ben Gaedeke, our Sergeant Major, not ten feet in front of me, when there came a blinding flash and terrific roar, as a shell burst just beyond me, then everything went black, while earth and rocks that had been tossed high in the air began to fall. I had not seen Ben hit and I never saw him afterward, nor could a vestige of his clothing be located. He was just blotted off the earth, by his own countrymen's shell. [p. 101]


Because of his position, Baldwin was close to Whittlesey throughout the ordeal. This allowed Baldwin to authoritatively refute one myth concerning the Lost Battalion and Major Whittlesey. At one point, several of Whittlesey's men left their position, without permission, in order to retrieve supplies dropped to the men by U.S. aircraft. One man, Private Lowell R. Hollingshead, was captured and coerced into carrying a surrender ultimatum back to Whittlesey. About this, Baldwin wrote (capitals in the original):

I WAS WITHIN FIVE FEET OF MAJOR WHITLESSLEY [sic] WHEN HE RECEIVED THE NOTE FROM HOLLINGSHEAD, and positively declare, he never made use of the world famed expression, by telling the German commander to "GO TO HELL," which is simply a myth, for as there was absolutely no recognition given to the Boche communication, therefore there was no necessity to answer it. [p. 109]

Hollingshead, however, bore the wrath of Whittlesey: "Turning to the unfortunate Hollingshead, the Major berated him unmercifully, in a loud angry voice, for having left his post without permission, ordering him at once to report to his company commander. This incident had spread like wildfire through the ranks." [p.109] No doubt Whittlesey's handling of the situation reinforced the necessity to obey orders in their precarious position.

After relief from the pocket and another brief stint in the lines, Baldwin became ill and spent most of the rest of the war in the hospital. He was promoted to battalion sergeant major and returned to the U.S. for discharge in the spring of 1919.

Although he did not have much formal schooling, Baldwin wrote well, if floridly; his memoir is easy reading and enjoyable. Most of Baldwin's recollections of his time in the "pocket" are fairly general; one would have hoped for more descriptions of daily routine and of particular incidents. But Baldwin, of course, wrote precisely what he wanted to, and for that we should be grateful. And kudos to Thomas Baldwin for publishing his father's memoir; we hope more such "family memoirs" will come out of the woodwork and into print.