The Centennial at the Grass Roots: North Dakota and the Great War 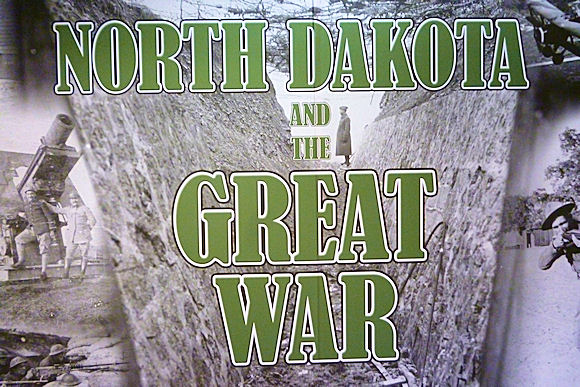 From Isolationism to Patriotism on the Great Plains

The uncertainty felt by Americans as they entered the Great War 100 years ago was nowhere more evident than in the upper Great Plains state of North Dakota. After favoring neutrality from the European conflict, North Dakota met the U.S. declaration of war in 1917 with mixed feelings, political uproar, and social discord along with the same patriotism that was sweeping across the country.

The ambivalence in this predominantly agricultural state placed it slightly out of step with the rest of the country in 1917. But as the troops were assembled, North Dakota rallied strongly to support the American cause.

All of this is brought home vividly in an exhibition, “North Dakota and the Great War” (http://history.nd.gov/wwi/), now installed at the North Dakota Heritage Center & State Museum on the grounds of the state capitol in Bismarck.


Through this exhibit, which will continue through fall 2018 we learn that:

• Neutrality was advocated strongly by prominent elected officials, some of North Dakota’s major newspapers, and its political organizations. The state’s congressional delegation led the isolationist movement in Congress, arguing that the struggle for power in Europe was not America’s fight and that corporate interests in the U.S. were pushing profits above peace. Both of the state’s U.S. senators were disparaged as “Senatorial Germans” for advocating neutrality. Senator Porter McCumber called vainly for a delay in the U.S. declaration of war, and Senator Asle Gronna was one of six senators who voted against the declaration, arguing that the war did not confront American citizens.

• A factor in the state’s desire for neutrality was based on an increasing population and rising prices for crops that were being shipped overseas. Twelve million acres of farm land was added between 1900 and 1920, and land values tripled. Both wheat acreage and wheat prices more than doubled by the end of the war. North Dakota’s citizenry was strongly in favor of “family farming” and consequently disparaging of corporate influences. Although it had its detractors, the politically potent Nonpartisan League (NPL) criticized war profits going to large corporations and argued for higher taxes on the wealthy.

• Questions of loyalty were raised concerning German-speaking residents who made up 20 percent of the state’s population. Some North Dakotans with German (or German-Russian) backgrounds were suspected of disloyalty, lack of patriotism, or trying to undermine the U.S. through political rhetoric. The State Board of Education was reported to have asked local school boards to abolish German language courses because it gave students the “wrong impression regarding the facts about the German government.” Many German language newspapers ceased publication, immigrant clubs dissolved, and German-sounding names were changed.

• The Espionage and Sedition Acts suspended freedom of speech and opened the door to governmental prosecution of those who spoke against the government’s war effort. With 103 prosecutions, North Dakota had the largest per-capita number of cases filed under the Espionage Act of any state. For instance, a minister for an evangelical church was found guilty of singing songs and praying for a German victory. A woman was convicted for vocal and active opposition of the war. Some officers of the left-leaning Nonpartisan League were disparaged, threatened, detained, or even jailed for comments concerning military enlistments or the conduct of the war. Federal judge Charles F. Amidon, who presided over the espionage cases, sometimes found juries too eager to show their loyalty by convicting the accused. Judge Amidon sometimes had to direct a jury to return a “not guilty” verdict.

• The negativity and controversy that divided North Dakota before 1917 ended in a surge of patriotism once war was declared. Two former state governors volunteered, one of them as a colonel with the 41st Division in France and the other on the state Liberty Loan committee and as a captain with the American Red Cross, for which he was honored by France. More than 200 doctors and 148 nurses from North Dakota served in the Army Medical Corps with others volunteering with the Red Cross. Dr. Eric P. Quain, a Swedish-born doctor practicing in Bismarck, organized a hospital in France staffed by doctors and nurses from North Dakota. Dr. Quain later was chief of surgical services for Army hospitals in France. Eventually, more than 30,000 North Dakotans served in the Great War.

• Some of the earliest patriotic response in North Dakota came from people who were not even considered citizens―the Native American population. Even before the U.S. entered the war, several Native American young men crossed the border to enlist in the Canadian Expeditionary Forces. None of the men at the Standing Rock Sioux Reservation asked for deferment or exemption from the draft. Some Lakota soldiers became “code talkers” who specialized in converting secret military codes into Native languages that the Germans could not break. When Lakota soldiers returned home in late 1919, a victory dance was held honoring returning soldiers and those killed. It reportedly was the first Lakota victory dance since the Battle of the Little Bighorn in 1876. A speaker was reported to have stated: “For the sake of humanity we will give (the Germans) food to keep them from starving till they can produce food for themselves, according to the old Indian custom.” When French marshal Ferdinand Foch, supreme commander of Allied Forces, visited Bismarck in 1921 he met with Native American representatives and honored one Native American soldier as “the bravest soldier in France.” Native Americans who served in the Great War were granted U.S. citizenship in 1919, and citizenship was extended to all Native Americans born in the U.S. in 1924.