Doughboy Basics: What Did the Doughboys Contribute to the Allied War Effort? 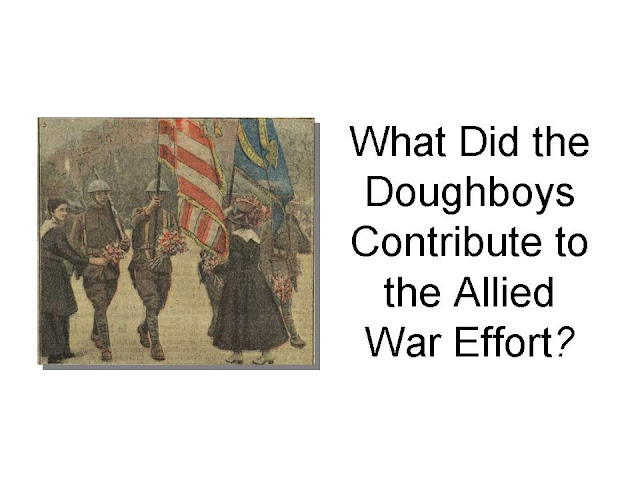 Let me form this posting around several blanket statements.

1.  America Did Not Win the War Single-Handed, but Its Entry Probably Prevented a German Victory.

The second part of this statement might seem controversial, but consider the following facts. Even with America on board, by the end of 1917, the Central Powers (discounting the food shortages on their home front briefly) appeared to be winning the World War. Russia and Rumania had been defeated and Italy required major reinforcement by its Allies to stay in the war. Salonika was a manpower-draining sore. Lloyd George—after Passchendaele—had no wish to provide replacement forces for a new offensive for General Haig's Army. Pétain's French Army was incapable of large offensive operations.

This would have been the state of affairs whether or not America was in the war.  But, absent the U.S. involvement, Germany would have had a good chance of winning the war with a highly advantageous negotiated settlement. Its optimal strategy would have been to go on the defensive in the west and use the men who were not needed to garrison the newly won territories in the east to restore its agricultural and food distribution systems. The Allies (absent the American reinforcements) simply would not have had the offensive power to push the German Army out of Belgium and France. Maybe fighting would have continued into 1918, even 1919, but at some point a settlement would have been reached. Germany would have held on to all its occupied territory in both the east and west and we would be living in a different world today (maybe better,  who knows?). But in any case, this strategy was not available, because they HAD gotten the Americans involved by fatally opting for unrestricted U-boat warfare a year earlier. This discussion continues in Point 3 below.

2.  The AEF and U.S. Navy Did Provide Almost Immediate Critical Support for the Allies in Several Areas:  (This Was Before the AEF Was Substantial Enough to Fight)

a. An expanded port-warehousing-railroad infrastructure benefiting all the
Allied Powers

b.  Medical and nursing personnel for the French and British forces

d.  Boosted Allied morale, especially for the French, rejuvenating both the
citizenry and soldiery for the brutal 1918 campaign

3. The Threat of Millions of Americans Arriving on the Western Front Forced the Germans to Launch Their Spring Offensives, Which Gave the Allies an Opportunity for Victory

We made the point above that at the end of 1917, the Central Powers appeared to be winning the war. However, as with all the major combatants, they were simply running out of men. Toward the end of 1917, Hindenburg and Ludendorff saw that—despite the promises of the German admirals—there was no stopping the flow of U.S. troops  across the Atlantic. Millions would be arriving by mid-1918 and millions more in 1919. At some time in the future, their forces in the west would simply be swamped.  As 1918 opened, they had the choice to negotiate for a settlement, which by that time would have involved considerable concessions, given the Allies strengthening hand with the Yanks arriving, or throw the dice for a chance to win a much more advantageous position in post-combat negotiations.  They chose the latter and eventually lost the war.

4. When the AEF Was Ready to Fight, Pershing's Forces Fought in Ten Major Battles, Six of Which—Had the Allies Lost—Could Have Changed the Outcome of the War.

a.  The Defense of the Marne River Line in May and June 1918

b.  The Defense Against German Champagne-Marne Offensive of July 1918

c.  The Offensive Phase of the Second Battle of the Marne,
July–September 1918

e.  The Breaking of the Hindenburg Line, September 1918