Trench Raiding and the First Three Americans Killed in Combat

Editor's Note:  The incident described below was personally described  to me in 1988 in Palo Alto, CA, by the officer who first identified the first three men of the AEF killed in combat. In 1988 he was known as Major General Ralph C. Smith, U.S. Army, of Makin  Island ("Makin, Taken") and Saipan (where he clashed with Marine General Holland Smith) fame.  At the time of this trench-raiding incident, he was Lt. Ralph Smith, 16th Infantry, First Division.  This account provides the best background of these events I've run into since I spoke with General Smith.  I found it at the American Battle Monuments Commission website, which has a lot of interesting material that sometimes requires a little digging to find, but is uniformly well written and informative. 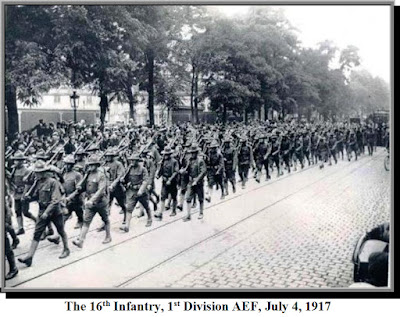 On the night of 3 November 1917 at 2:30 a.m. German artillery began a harassing barrage of Allied forces about a mile southeast of Arracourt, France. Unbeknownst to the Allies, the Germans did this to set up a trench raid, a common tactic in World War I to obtain intelligence and intimidate the enemy through bold action.

Infantry battalions of the American 1st Division had been assigned a short period in the trenches among French troops. The “Est” (East) Trench of the “Artois” strongpoint held 20 men. A hundred yards in front of them, behind the barbed wire, were 15 more men spread out in three guard posts. With these positions facing northeast, another platoon to their left faced north in “Boyau Nord” Trench.  The lines to their rear were French units of similar size.

While the barrage occurred a specialized German assault company with combat engineers approached the French wire in front of Artois. After 20 minutes the barrage shifted south slightly, giving these engineers the chance to blow paths in the wire. Experienced German trench raiders came through the wire near the juncture of Est and Boyau Nord Trenches, infiltrating the Allied line. Combining the element of surprise with the sheer shock of having enemy forces in the trench, these raids were surprisingly successful on many occasions.

One group rushed Boyau Nord, killing a sentry and driving off some Americans. The Est trench raiders captured around a dozen Americans and drove off others, while two Americans were killed. As the raiders headed back to the wire, they encountered the men in the guard posts, where a short firefight ensued. The German barrage had damaged phone lines making it impossible for the Artois strongpoint to call for pre-arranged fire in front of its wire. While a signal rocket was fired, Allied artillery arrived only after the Germans had retreated with their captives. This daring raid lasted less than five minutes. 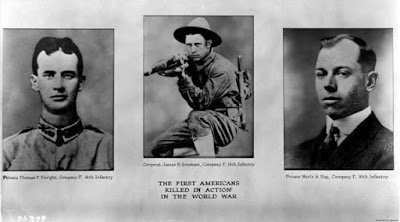 Cpl. James B. Gresham, Pvt. Thomas F. Enright, and Pvt. Merle D. Hay died in the raid. They had all volunteered for service, with Gresham and Enright having served in the Army under Gen. John J. Pershing prior to the United States joining World War I. The commander of the French 18th Division attended their funeral the following day and spoke of the three Americans as, “Having traveled so far to defend justice and liberty.” Gresham, Enright, and Hay became posthumous heroes in the United States, representing American patriotism and beliefs.

Five other Americans were wounded in the raid, and several French soldiers were also killed. The Americans of the 1st Division, who were captured in the raid, served as a curiosity to the Germans. Photographed with German troops, these dejected Americans appeared  on period German postcards.

Despite being incredibly dangerous, both the Allies and the Germans conducted trench raids on a regular basis . And the 1st Division became very effective at this tactic. Maj. Theodore Roosevelt, Jr., planned a raid at Cantigny on 26 June 1918 at 3:15 a.m. American soldiers of the 26th Infantry came through the wire and swept through German trenches, exiting with 33 prisoners and command post documents. But winning the war would take more than trench raids in the dark.